One of Vulcan's greatest heroes is dead. The gap between father and son, immeasurable before, is now so wide that it can never be closed. Into this tense and tragic situation comes Captain Picard, the last hope for a bridge between the generations...

The night after taking leave of Spock on Romulus, Picard has a vivid dream of visiting Sarek and Perrin's residence as if he were Sarek. Admiral Brackett grants permission for the USS Enterprise to divert to Vulcan so Picard can attend Sarek's memorial.

After beaming to Mount Seleya, Picard realizes that his previous mind meld with Sarek has granted him an eerie familiarity with the nearby city of ShiKahr. He, Data, Geordi La Forge, and Beverly Crusher climb the steps to the amphitheater at the top, where the service will take place. They intended to watch from the back, but Sakkath insists that Picard join him and Perrin at the front.

La Forge detects a Romulan amongst the guests and realizes that the life support of the Legaran delegation's tank has been sabotaged. To avoid capture, the saboteur jumps off the mountaintop to his death. The officers quickly aide the delegates and repair the tank, saving the Legarans' lives.

Perrin speaks at the ceremony, lamenting Spock's absence, believing that he's abandoned his family. Picard suddenly speaks with Spock's voice, relaying a message implanted in Picard's mind by Spock when they shared a meld on Romulus. Spock says that he honors his father, and is now doing as his father taught him, to do his duty without fail. He is continuing his father's work as a peacemaker and teacher of Vulcan philosophy, and will always miss him.

Sakkath then takes Sarek's katra into the Hall of Ancient Thought for the conclusion of the ceremony. 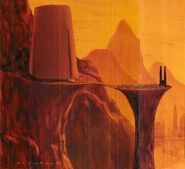