Legacies is a miniseries of three books, written by various authors, and set during different eras of the USS Enterprise's service history. All three volumes were published in 2016 as part of the 50th Anniversary celebration of Star Trek: The Original Series. 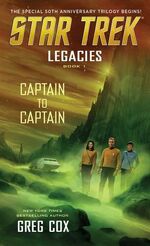 Hidden aboard the USS Enterprise is a secret that has been passed from captain to captain, from Robert April to Christopher Pike to James T. Kirk. Now the return of the enigmatic woman once known as Number One has brought that secret to light, and Kirk and his crew must risk everything to finish a mission that began with April so many years ago...

Nearly two decades earlier, April and his crew first visited the planet Usilde, where they found both tragedy and a thorny moral dilemma. Today, the legacy of that fateful occasion will compel Kirk to embark on a risky voyage back to that forbidden world — which is now deep in territory claimed by the Klingon Empire! 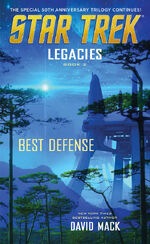 A debt of honor: One brave woman ventures alone into a parallel universe to save her old shipmates, exiled there decades earlier by a mysterious device called the Transfer Key. She soon learns the alternate universe harbors not just an alien invasion force, but a secret that underpins its very existence.

A mission of peace: A long-awaited Klingon-Federation peace conference convenes, led by Ambassador Sarek of Vulcan and Councillor Gorkon of Qo'noS. But both sides have enemies who would prefer the two great powers remain at war — and who will do anything to make certain hate wins the day.

An errand of justice: Captain Kirk and his crew seek the stolen Transfer Key that opens a door between universes, but their hunt is cut short by Ambassador Sarek's plea for help. The Enterprise crew soon becomes targets in a deadly crossfire—one whose outcome will decide the fate of two universes. 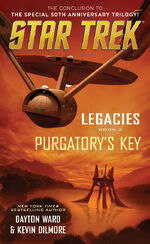 Eighteen years ago, the Starship Enterprise thwarted an alien invasion from another universe, and Captain Robert April took possession of the interdimensional transfer device that made it possible. Since then, each captain of the Enterprise, from Christopher Pike to James T. Kirk, has guarded this secret with his life.

Now, Romulan agents have succeeded in stealing the device and using it to banish Ambassador Sarek and Councillor Gorkon to an unknown realm in the midst of their groundbreaking Federation-Klingon peace negotiations. With time running out as interstellar war looms in one universe — and alien forces marshal in another — will Captain Kirk and his crew preserve the tenuous peace and reclaim the key between the dimensions?