The Original Series No. 56

A routine survey of the planet Alpha Octavius Four turns disastrous as Spock is attacked and poisoned by a huge creature and Kirk's landing party is trapped underground by a violent earthquake. As Spock fights for his life in sickbay, Scotty organizes a search for Kirk and his men. However, rescue efforts must cease when the USS Enterprise is called away to the Beta Cabrini system where a mining colony is under attack.

At Beta Cabrini, the USS Enterprise faces off against a Marauder named Dreen - a man that Spock has watched his former captain, Christopher Pike defeat years before. Fighting the effects of the poison, Spock struggles to his feet and takes command of the ship. Soon, Spock and Dreen are locked into a deadly game of cat and mouse - a game driven by mad revenge that can have only one survivor!

The Enterprise is on a survey mission of Octavius Four when Spock is attacked by a tentacled creature which injects him with a poison. After he is beamed back to the ship for treatment, the ground collapses, trapping Kirk and three other crewmembers underground.

Before the Enterprise can mount a rescue attempt, Scotty is ordered to answer a distress call from the Federation mining planet Beta Cabrini. The planet has been attacked and occupied by a group of Merkaan raiders led by Hamesaad Dreen. Spock, who helped Pike thwart Dreen several years previous, manages to control the effects of the poison mentally and take command of the mission.

Once arriving at Beta Cabrini, Spock agrees to beam down after Dreen promises that the Enterprise and the colonists won't be harmed while he's there. On the surface, he gives a coded message to the colony administrator, Bradford Wayne, a former member of Pike's crew. With the assistance of his two pet mesirii, Dreen hunts Spock through the hills until he collapses. By then, however, the colonists have carried out Spock's plan, rigging the minerals the Merkaan have stolen to emit a gas that knocks them all unconscious. Dreen is captured by Chekov before he can kill Spock and he and his men are disarmed and sent on their way.

Back on Octavius Four, Kirk's party have found their way back to the surface. Ensign Karras interprets some hieroglyphs as meaning a sting from a different creature will reverse the effects of the first. When Karras is herself attacked, the theory is proved and used to cure Spock when the Enterprise returns. McCoy realizes the "poison" is actually the creature's gametes and this is the method by which the immobile creatures impregnate each other, using those infected as carriers.

The back cover blurb calls the planet "Alpha Octavius Four"; however, in the novel it is only called Octavius Four. 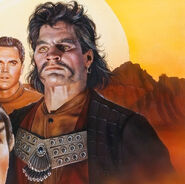 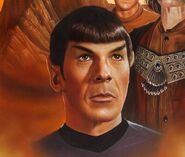 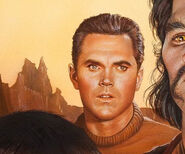