The Original Series (IDW Ongoing) No. 55

Legacy of Spock No. 1

Legacy of Spock, Part 1 is the 55th issue of the IDW ongoing series.

PREVIOUSLY IN STAR TREK...
It is the year 2258. The planet Vulcan is gone, destroyed by the Romulan Nero. The elder Spock returned to Earth to witness the promotion of young James T . Kirk to Captain of the U.S.S. Enterprise. Spock now embraces a new purpose in this alternate timeline: the discovery of a new homeworld for the Vulcan people...

In all his travels, no structure appeals to Spock as much as the Golden Gate Bridge. An oddly Vulcan-like structure, the elderly ambassador fondly recalls the hours he spent on it in quiet contemplation during his education. But now the time has come for Spock to leave San Francisco, quite possibly for the final time. Before departing, he reflects on the similarities and differences between this Federation and the one he knew but he is confident it will thrive nonetheless. And he will be around to see it. In a way. During his shuttle ride to the USS Mueller, Spock spares a longing glance to USS Enterprise. Boarding the Mueller, Spock despairs at the sympathy he is being given by the crew. If anything, he deserves scorn for his failures. Scorn he is quite confident the Vulcans will be eager to supply.

On Romulus, Senators Lucian and Vicia discuss that the once mighty Vulcan race has been reduced to a mere twenty-seven million inhabitants. Lucian is more than content to leave their crippled cousins be but Vicia feels that Nero's actions will galvanize the Vulcans into one day destroying the Romulans. Or to put it in simple math, she proposes wiping out a few million to save countless billions.

As the Mueller sails through space, Spock continues to study the similarities and differences before he is approached by a familiar face: Sarek. Though both men are eager to meet the other, Sarek advises Spock that he did not seek him out solely for curiosity. What few Vulcans have been made aware of Spock's true nature and his arrival in this timeline hold him (not completely illogically) responsible for Vulcan's demise. As such, Sarek is advising him not to speak at the upcoming convocation. Though Spock initially thinks Sarek is exaggerating the general feelings, his own sense of dread rises as the two are ferried to the Forge of Surak.

In the briefing room, the Vulcan elders recite the task before them and reveal the planet they have chosen upon which to rebuild their species: Ceti Alpha V. Spock interjects instantly warning that Ceti Alpha V is an unsuitable choice before he is cut off. Over Sarek's wishes, the elders strip Spock of all his titles and exile him. From this moment, he is no longer a Vulcan in the eyes of his people. Downtrodden, Sarek can only hang his head in shame and beg for forgiveness.

On Rura Penthe, a Klingon interrogates a prisoner for more information about the future while mocking the death of the prisoner's friends. A blade then impales itself through the Klingon's throat before a female helps up the prisoner. Nero may be gone but their mission remains the same... 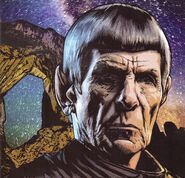 Subscription Variant
Add a photo to this gallery

Retrieved from "https://memory-beta.fandom.com/wiki/Legacy_of_Spock,_Part_1?oldid=664122"
Community content is available under CC-BY-SA unless otherwise noted.