The Original Series (IDW ongoing) No. 56

Legacy of Spock No. 2

2258
"The Legacy of Spock, Part 2" was the 56th issue of IDW Publishing's 2011 ongoing series of Star Trek comics. The issue consists of the 20-page second part of the Legacy of Spock storyline, the tale of Spock's ongoing travel in the Kelvin timeline, written by Mike Johnson. Issue art was by Tony Shasteen, with colors by Davide Mastrolonardo and lettering by Andworld Design. This series was edited by Sarah Gaydos, with Roberto Orci credited as story consultant.

Previously in Star Trek…
It is the year 2258. The planet Vulcan is gone, destroyed by the Romulan Nero. The survivors of Vulcan embark on a search for a new planet to call home. The elder Spock, having arrived from an alternate timeline, offers his assistance to what remains of his people. But his offer is rejected. Blaming him in part for the loss of their homeworld, the other Vulcans exile Spock from any contact with them. Meanwhile, ominous events unfold which may spell the end of the entire Vulcan race once and for all…

2267, the USS Enterprise hangs in orbit of Vulcan. Captain Kirk questions whether or not Spock wishes to spend some more time back home only for Spock to decline. The way the humans say "home" carries with it a sentimental, emotional aspect that Spock is immune. McCoy doubts Spock's stoicism given the events of yesterday but Kirk waves it off and orders a course set for Altair VI.

Decades later (earlier?), Spock finds himself leaving his people once again but this time, it is not his choice. He is escorted back to his shuttlecraft by Sarek who asks forgiveness. Spock however understands the logic behind the elders' decision and feels that there are worse fates than being an exile. He will find somewhere to go where he can help in secret but insists that Sarek deter any settlement on Ceti Alpha V. Boarding the USS Mueller once again, Spock asks to be dropped off at Deep Space Station K-7.

On the Klingon/Romulan border, the IRW Appex Winds fires a warning round at a lone Klingon raider before the alien vessel begins hailing the warbird... in perfect Romulan. When communication is established, the pilots reveal themselves as Arix and Vella, the last two survivors of Nero's crew.

Aboard K-7, Spock continues to examine the differences between this timeline and his own, finding broad similarities accompanied by minor differences. An inevitable phenomena when one considers the nature of infinite timelines. As he reflects on this, his memories travel back to the eventful day when he first boarded this station.

On Romulus, Vicia and Lucian examine the last traces of red matter. The substance is rapidly decaying... but it is enough to wipe out any remnant of the Vulcan people.

Basing himself in the bar, Spock's plan soon comes to fruition when his target steps in: Cyrano Jones. Sitting the man down, Spock request passage to Romulus which Jones adamantly refuses... until Spock doubles his price. As it so happens, Jones's stockpile of Romulan ale could use refreshing and he asks where Spock wants to be dropped off. Spock would to be dropped off in Ki Baratan.

In Ki Baratan, Arix and Vella give their testimony to the Romulan senate who subsequently award them full benefits and privileges of being soldiers of the empire, eager to mine their foreknowledge. Watching the proceedings, Vicia thinks they have found the perfect suicide bombers.

Dropped off in Ki Baratan, Spock makes his way to the home of Senator Pardek. As a Romulan, Pardek is obligated to provide hospitality to guests but as a senator, he is obligated to turn Spock in. Why should he not? With no alternative, Spock explains everything that led to him arrival in this timeline which allows Pardek to realize he is the "old Vulcan" that Arix and Vella spoke of, a valued bounty for sure. Spock has no fear, stating he knows Pardek leads the Romulan Resistance, the reunification movement between Vulcans and Romulans. Just as Pardek is ready to listen and offer aid however, imperial troops enter his home and place both under arrest.

In his cell, Spock is approached by Arix and Vella. Both of whom are very happy to see him again. 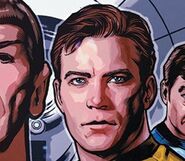 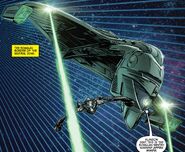