The Original Series (IDW ongoing) No. 57

Legacy of Spock No. 3

2258
"The Legacy of Spock, Part 3" was the 57th issue of IDW Publishing's 2011 ongoing series of Star Trek comics. The issue consists of the 20-page third part of the Legacy of Spock storyline, the tale of Spock's ongoing travel in the Kelvin timeline, written by Mike Johnson. Issue art was by Tony Shasteen, with colors by Davide Mastrolonardo and lettering by Andworld Design. This series was edited by Sarah Gaydos, with Roberto Orci credited as story consultant.

Previously in Star Trek…
It is the year 2258. The planet Vulcan is gone, destroyed by the Romulan Nero. The survivors of Vulcan embark on a search for a new planet to call home. The elder Spock, having arrived from an alternate timeline, offers his assistance to the Vulcan survivors. His offer is rejected. Blaming him in part for the loss of their homeworld, the other Vulcans exile Spock from any contact with them. Spock makes a secret journey to Romulus, hoping to spur the nascent peace movement there, decades before it would grow in the original timeline. But his presence is detected by the Romulan authorities, and now he faces judgement for his crimes against the Empire…:

In the 24th century, Jean-Luc Picard, Data and Spock trek through the tunnels beneath Ki Baratan. As they walk, Picard and Spock discuss the rather unusual circumstances they find themselves in given their professions and Picard's admiration in Spock's attempts to broker peace with the Romulans. Spock merely believes that peace is a logical goal, a goal embodied by the men and women who form the unification movement. And indeed, Spock's work was successful. Until Hobus. Until Romulus burned and Vulcan was blamed...

And so does Spock stand before the Romulan Senate once again with all his hard work undone. The praetor lists off the charges against Spock, thanks to testimony from Arix and Vella, and the belief that he is here to ensure Romulus dies a second time. Spock's response to the charges is a wry smile. The Romulans regard him as a Vulcan yet his own people do not. But nonetheless, Spock takes this unique opportunity to warn of the Hobus star which is doubtlessly building up to detonation only now, the Romulans have over a century to evacuate. The claim is disbelieved by the Senate, theorizing Spock wants an abandoned Romulus as a gift to his people, and they sentence both him and Senator Pardek to death. The next morning, Spock and Pardek are marched to a prison shuttle. Though Spock is pessimistic about the future, Pardek is unconcerned for the pilots and guards are in fact members of his resistance movement, a movement that has only been emboldened by Spock's arrival. After throwing off their pursuers, they meet up with the newest member of the resistance: Cyrano Jones who assures that he only threw them under the bus to save his own life. But now he's signed on with the resistance. After all, free trade across the borders is good news for any businessman. Though Spock is invited to stay on Romulus, he insists he is needed elsewhere and says his goodbyes to Pardek.

As the Vulcan fleet warps towards Ceti Alpha V, Sarek speaks to Elder T'Pah about Spock. Not about his warning regarding Ceti Alpha V but a new message from Romulus. Though the Elder is skeptical, Sarek convinces her to listen if not for his family's sake then for the sake of the Vulcan people.

On Romulus, Arix is furious that Spock was been allowed to escape much to Lucian's anger. As Vella calms tensions, Vicia reveals the Romulan fleet is preparing to destroy the Vulcans once and for all via the usage of red matter. This however cannot be done by remote and requires a brave pilot, or two, to pilot and detonate it. Where in the galaxy would they find a brave son and daughter of Romulus brave enough for such a task?

Aboard the Vulcan flagship, Spock has been granted an audience with T'Pah and he bluntly informs that the coming attack is to be the nail in the coffin for the Vulcan people. Realizing that pursuit is unsustainable, T'Pah makes ready to stand and fight, with Sarek opining that Starfleet be contacted. Spock sees the logic in a fight but warns that the Romulans will bring every ship, soldier and weapon they have. And they will not stop...

...until the last Vulcan is dead. 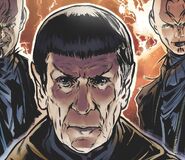 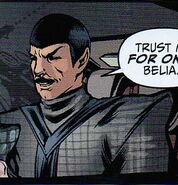