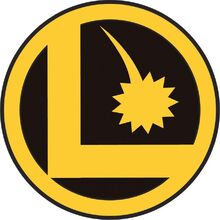 In an alternate reality, the Legion of Super-Heroes was an organization of the 31st century, a group of powerful youths with non-Human abilities.

In the Legion's reality, three teenage good samaritans saved an influential businessman from an assassination attempt. The three youths were Rokk Krinn, a Braalian possessing a power of magnetism; telepathic Titanian Imra Ardeen; and Garth Ranzz of Winath, who had been imbued with electrical powers by a chance encounter with a strange animal. In gratitude, the businessman sponsored them into a hero club, the Legion.

In one time-travel incident, shortly after a confrontation with Darkseid, six Legionnaires were traveling in a time bubble when they became trapped in a temporal distortion, and were deposited in the 23rd century of another alternate reality, on a version of Earth ruled by the Imperial Planets, a strange combination of the United Planets, the "prime" timeline's Federation and the mirror universe Terran Empire. (TOS - Legion of Super-Heroes comic: "Issue 1")

The group of Legionnaires soon became aware of another group of time travellers, a landing party from the primary universe USS Enterprise. The Legion retrieved a piece of technology from the wrecked time bubble that allowed them to track time distortions, and used it to seek out the Enterprise crew, even as both parties were fleeing from Imperial attack. (TOS - Legion of Super-Heroes comic: "Issue 2")

With the paradox in history resolved, the two universes were restored, with the primary universe having the immortal Vandar evolve into Akharin, who later became Leonardo da Vinci and Flint, as well as many other creative Human geniuses of history. In the Legion's reality, Vandar became some of history's most brilliant deviants, eventually abandoning personae and remaining as the immortal troublemaker Vandal Savage.

The Legion's time bubble trip was never interrupted after Q's changes to reality were reverted. In the revised history, they never met the Enterprise officers, nor did they witness Q and Vandar's changes to the converged history. (TOS - Legion of Super-Heroes comic: "Issue 6") 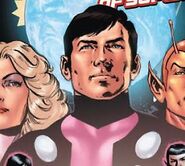 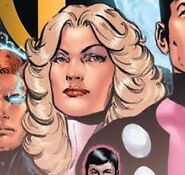 The Legionnaires pictured are wearing the costumes of comics released in the early 1980s. The mention of Darkseid places this story at the end of The Great Darkness Saga, in a time period that was around the 2980s, in the 30th century. All dialogue references in the Star Trek crossover comics has the Legion stating they were from the 31st century, an apparent example of retroactive continuity, or retcon. The current version of the Legion series takes place in the 31st century, not the 30th.