During her time on Earth as a graduate and postgraduate, Kalomi assisted in a number of xenocrop yield experiments. She helped a friend cross-pollinate an apple species with a Ta'utre VII fruit to yield longer-lasting apples. Her own doctoral thesis was on spore design.

In 2258, Kolami began a three-year relationship with a musical composer, and eventually they moved in together. She met Carol Marcus during a concerto on Earth in 2260.

In 2261, her boyfriend broke up with her. Kolami met Spock, a Vulcan Starfleet officer, at the Vulcan Embassy Gardens. (TOS novel: Inception)

Kalomi immediately loved Spock and declared her feelings for him, but Spock could not return those emotions for her. Even after they parted company, Kalomi still carried feelings for Spock. (TOS episode & Star Trek 5 novelization: This Side of Paradise, TOS novel: Inception)

In 2263, Kalomi joined Elias Sandoval's colonial expedition to Omicron Ceti III, and served as the groups senior biologist. When the expedition finally landed on Omicron Ceti III a year later, Kalomi discovered the pod plants and the contagious spores which they released into the atmosphere. While these spores protected the colonists from the deadly Berthold rays present in the atmosphere, they also gave the colonists a sense of contentment and perfect physical health.

Three years later, the USS Enterprise arrived in orbit of Omicron Ceti III to try and reestablish contact with the colony. Spock and Kalomi were quickly reunited, and she used one of the pod plants to infect Spock and break down his emotional controls so that he could love her in return. The couple spent many blissful hours together on the planet's surface, but the spores control over Spock was broken when Captain James T. Kirk was able to induce great anger in his first officer. Realizing that she had lost Spock once again, Kalomi broke down in tears. She later evacuated with the rest of the colonists to Starbase 27. (TOS episode & Star Trek 5 novelization: This Side of Paradise; TOS - Crucible novel: The Fire and the Rose)

Spock wrote a poem, which elaborates on his feelings for Kalomi. It seems possible that he did return her affections, secretly. (TOS short story: "Sonnet from the Vulcan: Omicron Ceti Three")

Some time after the evacuation, Kalomi met and married the geologist Alan Becker and travelled with him to Tau Beta IV to assist the construction of a dilithium mining station and the terraforming of the planet.

When Kalomi determined that it be very difficult to terraform the planet, the Federation Planetary Development Council decided to automate the station instead. When the the development team was transferred, Alan Becker requested to stay on the planet to determine the nature of its richness in dilithium and Leila Kalomi stayed with him.

On Stardate 5862.5, Kalomi contacted Mr. Spock on the Enterprise to come to her aid when she came to suspect that something was wrong with her husband, believing him to have been replaced with an alien entity posing as Alan Becker.

Mr. Spock travelled to Tau Beta IV to assist Kalomi in determining if something was wrong with Becker. Not soon after Becker took Mr. Spock underground to show him a unique discovery he made, a network of corridors that existed before the arrival of the Federation development team, and an elevator shaft that led deep into the planet.

In a massive underground chamber Mr. Spock was confronted by a powerful alien entity named S'uora, a being capable of telepathically controlling other beings who had assumed control of Alan Becker and had made him bring Mr. Spock to him in order to use the Vulcan officer to escape the planet which it revealed to be a prison created by its former servants when they were freed from its control and rebelled against it.

Mr. Spock resisted S'uora's telepathic attempt to take control of him and S'uora was forced to have Becker bring Kalomi to the underground chamber to use as a hostage to make Mr. Spock cooperate with its demands.

Instead Mr. Spock managed to defeat Becker despite the last having gained a resistance to the Vulcan nerve pinch, forcing S'uora to take control of Kalomi who had not developed such resistance or was capable of matching Mr. Spock in physical combat. Taking the two unconscious humans with him, Mr. Spock evacuated both to the mining complex after which he used the communications equipment to call the Enterprise.

Alan Becker had suffered mental damage from the control S'uora had exerted over him as well as physical injuries when Spock was forced to confront him. He had to be brought on board the Enterprise in order to undergo an emergency operation to save his life.

Though Doctor McCoy could heal the physical injuries, Becker's mind was a different case, and Mr Spock had to mind meld with Becker in order to repair the damage. The mind meld was successful and Becker recovered after which he and Kalomi would be transferred to the USS Hannon to be taken back to the Federation.

Before transporting to the Hannon, Kalomi and Mr. Spock spoke privately in which Kalomi had correctly deducted that there was something different to Becker now. Mr. Spock revealed that the damage S'uora's control had done had been so severe that he had been forced to insert a part of his own mind to use as a lattice on which Becker's thoughts and memories could be reconnected.

Kalomi considered this acceptable and thanked Mr. Spock for his aid before leaving the Enterprise. (TOS - New Visions comic: "The Hollow Man")

In 2285, during Spock's fal-tor-pan ritual on Vulcan, among the images flashing through the merged minds of Spock and Leonard McCoy was that of Spock kissing Leila. (TOS - Crucible novel: Provenance of Shadows)

Kalomi's height and weight are those of Jill Ireland, the actor who portrayed her. (Jill Ireland biography at Bodysize.) 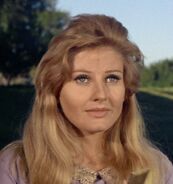