Chaos erupts aboard Deep Space 9 as the crew begins a desperate search for a killer in their midst, catapulting Colonel Kira Nerys on a dangerous chase into the heart of the Federation. But the crime she seeks to avenge is part of a plot more ancient and far-reaching than anyone suspects, and that secret, if exposed, could divide worlds throughout the Alpha Quadrant.

Meanwhile, as the starship Defiant makes its way back toward the wormhole and home to DS9, a startling discovery shakes Commander Elias Vaughn to his core and brings to light the truth behind the most tragic mission of his long life. As the crew struggles with the implications of what they've found, their captain's judgment comes into question... and casts doubt on the final outcome of their historic voyage through the Gamma Quadrant.

Following Shakaar's assassination by a Federation diplomatic representative, a stunned First Minister Asarem Wadeen prepares to refuse Federation membership and to expel Starfleet from DS9. However, she's not entirely ready to give up the future that Shakaar, the Emissary, and so many others worked towards so long and so hard. Kira says goodbye to Shakaar, despite their recent issues, and vows that those responsible will not threaten Bajor any further. Akaar blames Ro for her failed security precautions; Ro retorts that weak Federation security screenings allowed Gard to reach his target. The USS Gryphon discovers an ion trail heading for the Trill homeworld and is ordered to pursue. Kira goes along as a Bajoran representative due to her familiarity with starship procedures and her (still active) Starfleet commission. General Lenaris assumes command of DS9, with Admiral Akaar coordinating local Federation forces and demonstrating the mutual cooperation of the Militia and Starfleet. Despite the ion trail, Ro believes that Gard is still hiding aboard the station, and she and a shrouded Taran'atar hunt for him. She seizes operational command of the station (to Akaar's wrath) and reveals Gard hiding within the ceiling of Ops itself. His use of a holographic isolation suit suggests that a larger conspiracy within the Federation was responsible for Shakaar's murder. Shakaar's autopsy and Gard's interrogation reveal the involvement of alien parasites—first encountered by Pike and Audrid Dax in the 2250s, and again in their attempted takeover of Starfleet Command in 2364. Despite appearances, these parasites and Trill symbionts are essentially the same species. Shakaar was under the parasite's control for too long and could not be saved. Gard acted to stop the threat when he did to prevent (infected) Bajoran membership from threatening the Federation, and he suspects that the parasites have been manipulating the region's politics in preparation for their next invasion. Gul Macet is painfully infected by one of the parasites.

Aboard the Gryphon, Kira realizes the uncertain position Starfleet is in; if the Trill government tries to protect Gard, it could lead to revolution and Federation civil war. A secret message from Akaar informs her of the parasite conspiracy and of the admiral's suspicions that the Gryphon has also been infiltrated in order to execute the parasites' retaliation on Trill. First officer Montenegro plants seeds of distrust that make Kira believe Captain Elaine Mello has been infected, but it's really a ruse to lock Kira and Mello away while the (actually infected) XO assumes command. He fakes an emergency and orders the crew to abandon ship, though a handful of suspicious officers remain onboard and liberate Kira and Mello. They are unable to regain control of the ship and Mello is killed while hunting for Montenegro, but not before she transfers command of the starship to Kira. Kira kills Montenegro and the parasite before being confronted by three starships sent to stop the Gryphon from reaching Trill. Despite being locked out of all main systems, Kira is able to signal the USS T'Kumbra that the Gryphon is no longer a threat. General Taulin Cyl of the Trill Defense Ministry offers to share the full truth about the parasites, hoping to work together to end their threat to the symbionts and to humanoid life in general.

Kasidy arranges for the O'Brien family to visit a deeply depressed Joseph Sisko. The visitors, especially the children, reinvigorate Joseph and help him begin to deal with the losses of Ben and Jake. Ready for a new hands-on challenge themselves, the O'Briens agree to transport Joseph to Bajor for the birth of Kasidy's child.

In the Gamma Quadrant, the Defiant's mission of exploration has accomplished direct first contact with 11 species, initial communication with 16 more, the cataloging of 644 new life forms, and the mapping of 1,200 cubic light years. The ship intercepts a Starfleet Intelligence transponder, sparking a deeply worried Vaughn to keep all mission details secret from the crew. Tracing the signal to an uninhabited planet, they discover two crashed ships, one Jem'Hadar (the sole survivor or which is a Founder), and one Borg (the sole survivor of which is an assimilated Ruriko Tenmei, Prynn's presumed-dead mother). The ships had met in battle and destroyed each other before crashing on the planet several years earlier. Vaughn makes Ruriko's recovery and liberation the crew's top priority, despite the risk to the ship and crew, their limited resources, and the need to report back to Starfleet Command about Borg encroachment on the Gamma Quadrant. When Prynn discovers her mother's presence, Vaughn immediately confines her to quarters. Dax confronts Vaughn about his odd behavior and his putting personal matters ahead of the good of the ship, forcing him to share the details of Ruriko's final mission.

In 2347, Vaughn was tasked with extracting Dr. Cren Veruda, a defecting Cardassian cyberneticist. He was captured by Glinn Madred, but escaped with the help of disguised fellow operative Ruriko Tenmei. The two shared a friendly rivalry despite never having previously met, and Vaughn was instantly attracted to his “nemesis.” Veruda had created a revolutionary AI that could expand itself across subspace, and was to be the backbone of Cardassian military technology. Tenmei, Vaughn, and T'Prynn (his partner of three decades) spent the next three years neutralizing the AI. T'Prynn died in a transporter extraction in 2349, and Tenmei opted to leave covert operations to raise their daughter (Prynn). Despite his new family, Vaughn was constantly away on assignment. In 2369, a rogue copy of Veruda's AI was discovered at Uridi'si and Ruriko was recalled to action. The starships T'Plana-Hath and Valkyrie attempted to destroy the AI, but were interrupted by a Borg ship. Ruriko had to board the Borg ship to decompile the AI before it could combine with Borg technology. Vaughn watched helplessly as the Borg ship retreated through a transwarp corridor, followed by the Valkyrie, which was presumed destroyed. In fact, Ruriko successfully erased the AI and escaped to the Valkyrie, but the starship was caught and assimilated. Now a Borg vessel, the former Valkyrie was tasked with scouting the Gamma Quadrant, in order to add Jem'Hadar and Changeling distinctiveness to the Borg's quest for perfection. The discovery and invasion of Species 8472 apparently made them reclassify the Gamma Quadrant as a lesser target.

Vaughn refuses to give up on Ruriko, but agrees to Ezri's precautions. Wary of the odds that his ship would stumble across Ruriko in the Gamma Quadrant of all places, Vaughn learns that Prynn has never stopped looking for her mother, but he suspects that the Prophets have also put him on some path of destiny. Nog and Bowers recover the Changeling, who agrees to transport home and Shar retrieves a Borg corpse to learn about its Gamma Quadrant mission. Despite its body being dead, the drone's nanoprobes reactivate and try (and fail) to assimilate the Founder's radically different morphogenic matrix. Prynn seems to be reaching her mother, but Vaughn fears that the Borg part of her is about to hurt Prynn and kills her, leaving Prynn devastated. Ezri counsels Prynn and Vaughn, encouraging them to move past their grief together rather than letting it tear them apart again. Nearly home, the Defiant encounters a Jem'Hadar ship commanded by yet another Weyoun clone. They deliver the errant Founder and take on Weyoun's guests: an alien named Wex, (former Kai) Opaka Sulan, and Jake Sisko. They also find that the entire Idran system has shifted several light years to surround the Gamma terminus of the wormhole. 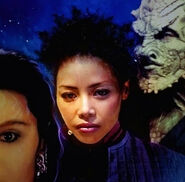 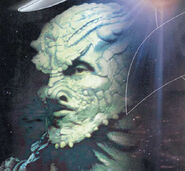