Let That Be Your Last Battlefield

Let That Be Your Last Battlefield

"Let That Be Your Last Battlefield" was the 70th episode of Star Trek: The Original Series, the 15th episode of the show's third and final season, first aired on 10 January 1969. The episode was written by Lee Cronin and Oliver Crawford, directed by Jud Taylor and novelized in Star Trek 5 by James Blish.

On a mission to decontaminate the planet Ariannus, the Enterprise retrieves a stolen shuttlecraft with one person aboard—Lokai—who is white on the right side of his body and black on his left side. An invisible spacecraft comes straight toward the Enterprise and leaves its pilot aboard before being destroyed. The pilot is Bele who is black on the right side of his body and white on his left side. Bele is a police commissioner from the planet Cheron V who has been chasing Lokai for 50,000 years across the galaxy. Although slavery was abolished on Cheron the ruling class is Bele's color and the ruled class is Lokai's color.

Lokai tries to enlist the Enterprise crew in his crusade and Bele claims to be superior color to Lokai to James T. Kirk and Spock. When the Federation refuses to honor Bele's request for custody of Lokai, Bele with the power of his will tries to hijack the Enterprise to Cheron in a standoff with Kirk who for his part activates the self destruct—which is only averted when Bele agrees to turn over control of the starship to Kirk.

When Ariannis is decontaminated, Bele hijacks the Enterprise again—after destroying the self destruct with his will. On arrival at Cheron, the ships sensors show that the entire humanoid population has wiped out one another. Lokai transports himself down to Cheron followed by Bele.

Captain's log, stardate 5730.2.
The planet Ariannus is vital as a transfer point on regular space commercial lanes. It has been attacked by a bacterial invasion which threatens to render it lifeless unless checked. Our mission, to decontaminate it.

Captain's log, stardate 5730.7.
Having completed our mission to Ariannus, the Enterprise is now on course to Starbase 4. The crew is on normal routine and we are proceeding without incident.

Captain's log 5730.6.
In a deliberate act of sabotage, Commissioner Bele has burned out our destruct mechanism and, through the power of his will, has again taken over directional control of the Enterprise.

years prior to 2268
Lokai organizes revolutions among the enslaved on Cheron. (prior to episode/novelization)
stardate 5430.2, 2268 (2260s chronology, 2264–2270 Enterprise voyages)
Enterprise travels to Ariannus. 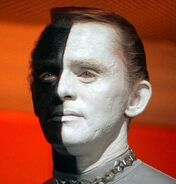