24.09.45 - 25.00.10
"Life Form Nonexistent" was a Star Trek: The Original Series comic strip published in 1969. It was the first story in the UK comic strips series, and was released in six parts, in issues of Joe 90: Top Secret. The story sees the USS Enterprise taken to a planet inhabited by robots, who try and steal the ship.

While Captain Kirk enters a log report in his quarters, noting a five month period of quiet, on the bridge navigator Bailey reports interference with the navigational laser beam; Spock orders Sulu to hold the Enterprise steady, but then the ship is hit by a cosmic storm from a supernova. Spock reports the incident to Captain Kirk, but as the Enterprise made it through the storm unaffected Kirk continues with his planned visit to the gym.

Seventy-two minutes later Kirk reports to the bridge, just as Spock is investigating a fault with the star camera, they order a repair wagon to go and conduct external repairs. Once the wagon is outside the ship Jackson notes that the Enterprise is now in orbit of a planet, much the bridge crew's surprise. The crew visually confirm the presence of the planet through the bridge's observation port but the computer does not detect it. Concerned that either their minds or the computers are being deceived Kirk orders an emergency alarm. Kirk has the repair wagon recalled and then issues an order to disconnect the computer systems aboard ship. As a crewman begins to disconnect the navigational computer he is thrown back; and a message arrives from the main computer warning the crew not to disconnect any more computers and that they are being brought into land. Kirk orders the crew arm themselves in preparation for what awaits them on the planet.

The Enterprise is remotely piloted down to land in a city populated by robots. While his crew report they have a target on the ship's phasers Kirk is all too aware that they are in fact controlled by the robots now, and instead orders a landing party to exit the ship and make contact. Once on the planet's surface the robots knock the crew out with a blue-tinted energy weapon.

The crew awake to find themselves stowed in the forcefield enclosed rear compartment of a robot transporter vehicle. As they travel through the robot city they have a miraculous bout of luck as the transporter spontaneously explodes. The forcefield remained in place long enough to protect the crew from the explosion before collapsing to allow their escape from the wrecked vehicle. The crew begin to investigate the city, and find a chamber housing a massive statue of a humanoid. They also find an advanced computer with a number of helmets, one of which Kirk tries on before Spock can warn him not to - The captain is disabled, and while the crew is distracted checking on him the statue moves, revealing a large robotic arm, which grabs the crew.

The arm announces itself as the Master Computer, and claims to be the creation of a race of Humans who left the robots on the planet a million years ago. While Kirk and Spock discuss the improbability of Humans from Earth being responsible for the creation of the robots the Master Computer goes on to explain the robots' predicament; their power source is dying, and they are attempting to find a replacement by dismantling the Enterprise. Having informed the crew of its planes the master computer seems ready to dispose of them, when Spock has a realisation; if the robot was constructed by men it would be programmed to respond to their commands. He tests his hypothesis by ordering the computer to put the crew down, it complies. Kirk postulates that the same tactic might work for the robots, and they are soon able to test the extension of the theory when two robots appear - they do not surrender as ordered; as next generation robots, they were built by other robots, and respond only to the commands of robots, not humans or the Master Computer. The Master Computer still responds though, and Spock orders it to restrain the robots. However, the robots threaten the life of the rest of the crew if they are not released, so Kirk is forced to comply.

The robots then order Kirk and Spock to give them access to the Enterprise's power unit, which they have been unable to get into, and Kirk sees an opportunity to resist. Kirk agrees to extract a power rod from the Enterprise's power unit, but works with Spock to place it in a cobalt container, which, as Spock notes, will cause an explosive reaction in fifteen minutes. Upon returning the surface the robots are momentarily distracted when the Enterprise crew attempt to violently resist them, the mob is quickly quelled by the robots' knock-out rays and the robots then order Kirk to take the power rod to their power unit to install it.

En route to the robot power unit Kirk and Spock worry about the imminent explosion of the rod, but realize whatever the outcome, the Enterprise crew will be able to escape, even if they have to die in the explosion that allows it. Once they arrive at the unit Kirk notices an emergency shut down button. While using remote armatures to install the rod, Kirk causes it buckle, so that it won’t fit; he suggests his robot guard attempt to install the buckled rod, making use of its superior strength, and while the robot is distracted Kirk hits the emergency shut down, disabling the robots. Kirk and Spock run for it, and take cover as the rod finally explodes, while further out from the blast zone the other robots all collapse as their power supply is cut off.

As the dust settles Spock comments: "We are free Captain. This will read like an adventure story in your log book" to which Kirk responds: "I doubt it, Mr. Spock. Our task is to map the stars... All my log will state is, "explored uninhabited planet, life-form non-existent!""

While stardates in the mid 2000s generally indicate a chronological placement in the latter part of 2266, the presence of Bailey on the Enterprise places this story early in the year, before the events of "The Corbomite Maneuver".

c. 1,000,000 BC
The humanoid creators of the robots and the Master Computer abandon their creations, leaving them to fend for themselves. The Robots eventually learn to build new generations of their kind. (Flashback on pages 7-8, referenced as happening "a million years ago")
Five months prior to stardate 24.09.45
The USS Enterprise is on a star mapping mission, proceeding without incident for five months. (Five months of quiet described in the ship's log on the first pages)
Stardates 24.09.45 - 25.00.10 (c. 2266)
The USS Enterprise is remotely hijacked by a race of robots and forced to land on their planet where they hoped to take the Enterprise's power rods to refuel their own power units. With their crew threatened by the robots, James T. Kirk and Spock work to sabotage the first power rod taken from the Enterprise, making it an explosive which then destroys the Robots' power unit and subsequently disables the Robots, allowing the Enterprise to escape. (Events of the entire story) 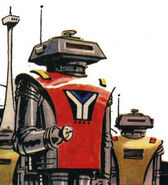 Two of the Robots. 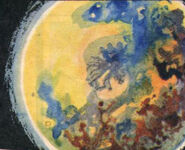 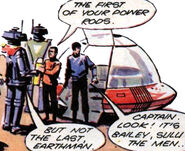