For other uses, see Lifesigns.

The Next Generation (DC series) No. 51

42102.5
"Lifesigns" was the 51st issue of DC Comics' ongoing series of TNG comics. The issue consisted of a 24 page story, edited by Alan Gold, authored by guest writers Judith and Garfield Reeves-Stevens. Regular writer Michael Jan Friedman would return the following issue. The art was penciled by Peter Krause and inked by Mike Christian, with Rick Taylor and Richard Starkings credited as colorist and letterer, respectively. This was Krause's final issue as the regular penciller of the series.

Captain's log, stardate 42102.5
We are investigating the unexpected supernova of Epsilon Miranda. Sadly, our sensors indicate that the star's fifth planet was inhabited by intelligent beings who had not yet developed space travel.

When their sun exploded two months ago, they had no chance of escape… 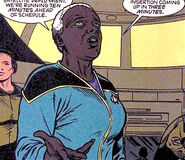 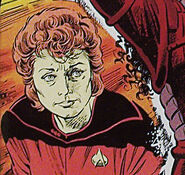 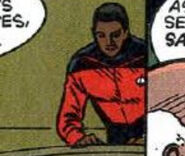 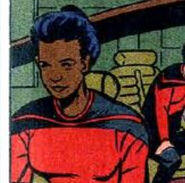