The Original Series (IDW ongoing) No. 50

Though the crew of the USS Enterprise has acclimated well to their extended stay in deep space, their mission is bound to encounter dangerous and unknown phenomena such as ion storm. The bridge is at red alert but given the unpredictable nature of such storms, the sensors cannot accurately pinpoint where they are relative to the storm's centre or how wide the storm is. 0718 soon reports however that the Enterprise is emerging. Pavel Chekov notes however that they have somehow been thrown across the quadrant and into the Ceti Alpha system. As Kirk and Spock discuss the unusual effects of the storm, Uhura detects a transmission from the fifth planet. A hysteric woman appears on the viewscreen begging for mercy. Ceti Alpha V is too baerren for the colonists to properly pay the imperial taxes. Eager for answers, Kirk beams down with Uhura, Zahra and Leonard McCoy. Upon arrival, they are greeted by the colony's leader, Khan Noonien Singh. Phasers are out in seconds as Kirk calls for reinforcements but Khan's words give the away team pause as he refers to Spock as captain.

In orbit, communications with the away team are being jammed before an unknown starship decloaks off the starboard bow. The flagship of the Terran Empire, the ISS Enterprise ICC-1701. Both ships open frequencies with Captain Spock ordering a boarding party to seize the enemy craft. Federation shields prove inferior to their Terran counterparts as Uhura is easily able to lead a squad aboard that takes the bridge in seconds. With that taken care of, Spock orders Chekov to target the Augment colony below and commence orbital bombardment.

On the surface, the phaser bolts reduce the colony to a flaming ruin. Khan directs what few survivors he can to run before he seizes Kirk. Believing this to be a Terran trick, he hoists up the man and asks for a reason he should spare him.

On Arronia II, Harry Mudd speaks to a shrouded figure eventually asking how he survived his first officer's plot. The figure has friends in low places but that is irrelevant. He is believed dead which gives James Kirk an advantage in his gambit to regain control of the Enterprise.

Captain's log, Stardate 2263.27.
It's been smooth sailing since our departure from Banks-216.
All ship systems are running at optimal levels.
Crew morale is high.
But it wouldn't be deep space exploration if the seas didn't occasionally get rough.

earlier in the year 2263 (Kelvin timeline)
Enterprise leaves Banks-216. (before the issue) 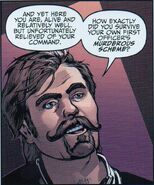 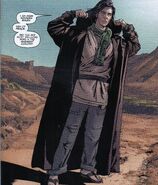