The Next Generation (Pocket TNG)

Fortune has smiled on Lieutenant Jasminder Choudhury, chief of security on the U.S.S. Enterprise. She has survived. But her homeworld, Deneva, one of the planets targeted in the massive Borg invasion, has not. The entire surface has been wiped clean of everything, killing anyone who did not evacuate and rendering the planet uninhabitable. Choudhury is left to wonder whether her family was one of the displaced. Or are they all gone forever?

The Enterprise is just one ship, and Jasminder Choudhury is just one officer, yet her story is being repeated over and over across the galaxy. Hundreds of thousands of displaced persons haunt the space ways, seeking comfort, looking for someplace safe, somewhere, anywhere to find solace. Captain Jean-Luc Picard is ordered to do everything he can to rescue and if need be to recover the lost souls from the Borg invasion.

For the first time in generations, citizens of the Federation know want, uncertainty, and fear. Bloodied yet unbowed, the Federation stands on the edge of a precipice. The captain of the Enterprise finds himself in the unenviable position of wondering whether it is true that those who can win a war well can rarely make a good peace.

In the wake of the Borg invasion of 2381, the USS Enterprise is undergoing reconstruction, while the crew enjoys some leave. In France, Picard and Beverly stay with his sister-in-law, but their leave is interrupted by a visit from Barash who asks Beverly to lead a mission to Pacifica to assess the refugee situation. Meanwhile, Worf and Jasminder Choudhury are on Deneva, where her parents lived prior to the destruction of the planet by the Borg.

As Beverly embarks for her mission to Pacifica, she takes Miranda Kadohata with her to assuage her husband's concerns for his pregnant wife. Picard and the Enterprise crew are recalled to embark on their own self-defined mission -- dispatched by President Nanietta Bacco and Admiral Akaar -- to deal with the refugee populations still lost within Federation space near Earth.

On Pacifica, Beverly, Miranda, and their team discovers an infrastructure and government grossly unprepared and reluctant to handle the pressure of a semi-permanent refugee population. As tensions grow between the aquatic Pacificans and the refugees, Beverly experiences continual flashbacks to the events that brought her to leave Starfleet and those that brought her back. When contaminated water spreads a plague within the refugee camp, and the Pacifican government threatens to build a concentration camp in all-but-name, Beverly grounds the runabout and establishes a more permanent base to the chagrin of her non-Starfleet team-members. With the help of the resident medical personnel and one refugee, Arandis, Beverly manages to get the outbreak under control.

On the Enterprise, Lieutenant Choudhury develops a technique for projecting the routes of refugee ships leaving decimated planets and the crew are able to locate one Denevan refugee group, including the Denevan president. With the president onboard, the ship is called away to Alpha Centauri where Picard learns that the planet is considering withdrawing from the Federation. Frustrated by the short-sighted and selfish nature of the Centaurian president, and spurred by a message from Beverly, Picard essentially kidnaps the Alpha Centaurian president and sets course for Pacifica.

Meanwhile, T'Ryssa Chen learns that her mother was killed during the invasion, and is contacted by her long-absent father, who seems interested in reestablishing their relationship. After an earlier misunderstanding, she also comes to understand the grief of Taurik, who lost his spouse during the Borg attack on Vulcan.

Over the course of the mission, Choudhury comes to terms with the loss of her family -- after talking with the Denevan president and realizing her family sacrificed their lives to give others a chance to escape. On Pacifica, the shortsighted Alpha Centaurian president sees his error and decides instead to renew his peoples' commitment to the Federation. Admiral Akaar arrives at Pacifica to talk with Picard about his continued defiance of orders and offers him a promotion to Admiral where he can serve as coordinator of the relief efforts, but Picard notes that a wise man once told him that he should never leave the Enterprise as it is only in that chair that he can truly make a difference. Learning that this advice came from Captain James T. Kirk, Akaar concedes to Picard's decision, reflecting that Starfleet may need another captain like Kirk more than it needs another admiral at this time.

As the mission comes to an end, Miranda Kadohata decides to remain temporarily on Pacifica and continue to help the refugees, also hoping to be more fixed and closer to her family. Shortly thereafter, Picard learns that the Federation's renewed commitment to peaceful exploration might have to be delayed when President Bacco announces the formation of the Typhon Pact.

"...We're facing and entirely reshaped and tenuously held together Federation and frankly, it could be a lot easier to deal with a disagreeable equal than a disagreeable subordinate. You would be the primary director of our postwar rebuilding efforts, deciding how ships and personnel and materiel get allocated and moved around. It's going to be a vitally important role, Jean-Luc, and one in which I believe you will excel."
"I am deeply honored, Admiral. But I must decline."
"Now, don't be rash, Jean-Luc.... You've proven yourself. You've earned this. It's a chance for you to make a real difference."
"A wise man once told me, 'Don't let them promote you, don't let them transfer you, don't let them do anything that takes you off the bridge of that ship, because while you're there, that's where you can make a difference."
"And what fool told you that?"
"James T. Kirk."
(mutters) "There's little point in arguing with that then..."

As a novel in the post-Nemesis TNG continuity, Losing the Peace is one of a sequence of stories that do not reconcile well with the events established in Star Trek: Picard. In particular, the evolution of the Borg might not match details of the new canon series. 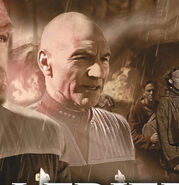 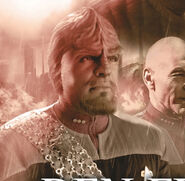 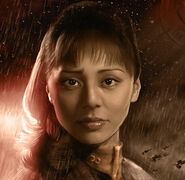 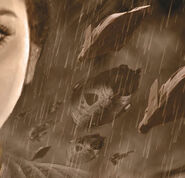 The historians note at the beginning of the book erroneously claims "the main events in this book take place in late February to early March of 2361", which is most likely a typing error. They in fact occur in those months of 2381, shortly after the events of the Star Trek: Destiny trilogy. The book opens with a prologue set immediately after the Borg Invasion in Destiny, while the rest of the story takes place from a couple of weeks later. The book also has several flashbacks to points in Beverly Crusher's life (in 2354 and 2357) surrounding the death of her late husband, Jack Crusher. The book's epilogue is on stardate 58357.1 (May of 2381), a day before President Bacco's press conference to announce the formation of the Typhon Pact, as seen in A Singular Destiny.