The Original Series (IDW ongoing) No. 33

PREVIOUSLY IN STAR TREK...
The USS Enterprise continues its new Five-year mission of exploration following the events of STAR TREK INTO DARKNESS. Now at the very edge of the Alpha Quadrant, a terrifying secret waits to be discovered...

Cocoa Beach, Florida, March of 1970. Steve Cory enters his house to excitedly inform his wife Tabitha that he has been selected for NASA's Apollo program, a part of the program so secret it is doubtful that Armstrong even knows about it. Though happy for her husband, Tabitha lays a hand on her bloated stomach, wising the timing was better. Steve laughs off those concerns, it will be years before they are ready to launch.

Two hundred and ninety-one years later, the USS Enterprise arrives in orbit of the unexplored planet Hinrichs V. An overeager Sulu asks to join the away team but Kirk overrules him. The wait list is long enough already before Carol Marcus manages to convince Kirk to allow the helmsman to join in. Spock however questions the need for an away mission. The Enterprise is perfectly capable of gathering all necessary data from orbit. In addition, the planet is in an extremely primitive state, the away team could potentially alter its evolution drastically. After promising not to pick any flowers, Kirk reminds his first officer that the Enterprise has always managed to overcome any trouble they find themselves in. Technically, Spock cannot argue with that.

The away team materializes to find a landscape teeming with organic life of every variety, Carol's tricorder barely able to compute all the inflow of data. Even more, the atmosphere is perfectly breathable. After observing the planet's unusual wildlife, Kai begins detecting a metallic reading. The reading leads to a cave filled to the brim with skeletons from which Kai fishes out a 20th century circuit board. Carol then picks up traces of human DNA but not from any of the corpses. To add to the mystery, Sulu finds a child's drawing held in an old plastic bag. The away team decides to head back to the ship before Sulu notices that a native has claimed his tricorder and he runs off after it. As the rest prepare to follow, a powerful roar puts them on high alert.

In orbit, Uhura has lost contact with the away team prompting Spock to beam down with a security detail. The security team finds Sulu, who has retrieved his tricorder, before they detect the transponders of Kai and Zahra, who were knocked out by an incredibly fast creature. The same roar sounds and the away team assumes defensive positions before the beast breaks through the brush, holding the prone forms of Kirk and Carol. 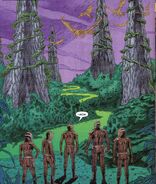 Surface of Hinrichs V
Add a photo to this gallery

Retrieved from "https://memory-beta.fandom.com/wiki/Lost_Apollo,_Part_1?oldid=663653"
Community content is available under CC-BY-SA unless otherwise noted.