44012.3
Loyalty is a Star Trek: The Next Generation manga story from the 2009 anthology Boukenshin, published by TokyoPop. The story, written by F.J. DeSanto and illustrated by Bettina Kurkoski, deals with the fallout of the events of the episode "The Best of Both Worlds", with Will Riker arguing with Starfleet Command that Jean-Luc Picard should resume command of the Enterprise even after his experience as Locutus.

From the back of the anthology Boukenshin
When Starfleet Command expresses their concerns over Picard's brush with the Borg, Commander Will Riker will have his devotion to his captain put to the ultimate test – possibly at the cost of his own career.

First Officer’s Personal Log, Stardate 44012.3
Having limped back to Earth after our encounter with the Borg, the Enterprise has begun its repairs at Earth Station McKinley. I will be supervising the refit while Captain Picard takes a well-deserved shore leave. While the damage to the Enterprise can be repaired easily, I can’t help but wonder if the same can be said of our Captain. I’m sure many are wondering if Captain Picard has recovered fully from his assimilation by the Borg, and are asking the question – Have we seen the last of Locutus? I believe we have, but only time will tell.

Packed and ready to visit his family in France, Captain Picard stopped by the briefing room to speak with Captain Riker. Walking together to the transporter room, Picard confided that psychological wounds from the Borg attack were still fresh for everyone, himself included, but he appreciated Riker looking after the ship while he was gone. O’Brien beamed Picard off the ship, then Riker returned to the bridge to hear that many of the ship’s repairs were well underway.

Riker took a priority call from Starfleet in the ready room, surprised to see Vice Admiral Thomas Henry, Chief of Starfleet Security. Henry requested that Riker attend a confidential meeting in the morning. That evening, Riker confided to Troi about the mysterious meeting, then bade farewell to Data, Worf, LaForge, Troi, and the two Crushers while boarding a shuttlepod early the next morning, giving Wesley Crusher temporary command.

After landing in San Francisco near Starfleet Headquarters, Riker was escorted by two dour officers to a room labeled “Highest Security Clearance Required.” Within was a large hall resembling the Federation Council Chambers. At the far end, four officers awaited Riker. Henry introduced two officers whom Riker knew, Admiral Jeremiah Hayes and Captain Phillipa Louvois, and one Riker did not know, Rear Admiral Bradish, whose children had served on a vessel destroyed at Wolf 359.

Henry asked about the status of the Enterprise. Riker updated them, then asked the real reason for this meeting. Henry and the others commended Riker for his actions during the Borg conflict, promoted him permanently to captain, and gave him the Enterprise. Picard would either be retired or given a ground assignment, concerned that he was no longer fit to command after having been compromised by the Borg. They clarified that details regarding Wolf 359 were classified, that it would be politically disastrous to allow Picard to resume his command. Bradish considered Picard responsible for losses at Wolf 359. Bradish played a transmission received shortly after the battle from Captain Amasov of the Endeavour (NCC-71805), the lone surviving ship from the battle, who described the Borg as pure evil and their tactics as “cold, calculating, murderous.”

Louvois said the group was undecided about Picard, however, and wanted to consult with Picard’s strongest advocate, Riker. Riker explained that Picard stopped the Borg cube, not Riker or the Enterprise crew, when he overcame Locutus to tell Data which command node to override. Hoping to counter Riker’s argument, Bradish the invited Commander Elizabeth Shelby to appear before the group. Following a lengthy briefing and discussion about the battle, Shelby concluded that Picard was not responsible for the actions of Locutus. However, she couldn’t promise that there was not some undetected method by which the Borg could control Picard in the future. Riker grew frustrated, calling this a court martial, not a meeting. Bradish warned Riker that if he didn’t assume command of the Enterprise, with Shelby as his first officer, that it could hurt his career. With that threat, Riker lost his patience. If they were getting rid of Picard, “I resign immediately,” he said, and threw down his comm-badge. He said every one of Enterprise’s command staff would follow him, leaving their flagship without a crew. In support, Shelby removed her comm-badge and also resigned. The two headed for the door.

Before they left for good, Hayes appealed to them what could be done to resolve the situation. Riker said they should allow Picard to resume command. Should he be co-opted in any way by the Borg, Riker would take care of it. The group accepted Riker’s offer, though clearly Bradish dissented.

Walking with Shelby back to his shuttle, Riker commended her for resisting the carrot of becoming Enterprise’s first officer. Shelby said she didn't want to get the position in that way. She confessed she still didn’t know if Picard would be entirely free of the Borg, but Riker’s confidence had won her over. Shelby said she was headed to the USS Chekov to serve as its first officer, and she and Riker departed on friendly terms.

After landing back aboard the Enterprise, Riker was again meet by Data, Worf, LaForge, Troi, and the two Crushers, who were surprised to see Riker back as a commander. Riker just said “the brass needed me to update them on the refit.” 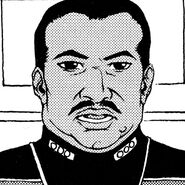 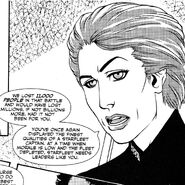 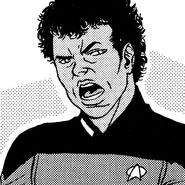 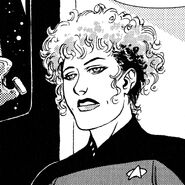 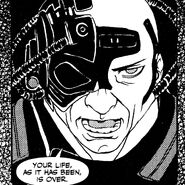