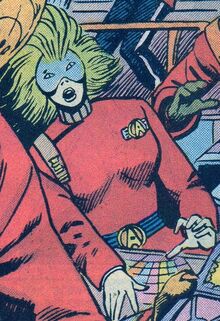 Ludlo was an alien Starfleet officer, who manned operations stations on the bridge of the USS Enterprise-A.

She normally wore blue goggles on her shifts, and had light skin and green hair. Ludlo manned the tactical and navigation station on stardate 8953.7 when the ship experienced difficulties. She ended up taking the helm and later gave the post to Sulu when the day watch arrived, and was back at the tactical-navigation station on a later shift on stardate 8953.19. (TOS comic: "The Corbomite Effect!")

Ludlo's rank insignia and Starfleet uniform division color were not visible in the rough background artwork. She my have been an lieutenant, the only other facts we know is that she wore an officer uniform and therefore could be any thing from an ensign to lieutenant commander, considering that she was subordinate to a commander of uncertain grade on that shift. Since she started off manning Chekov's duty station, she might be interpreted as having worn a gray department insignia patch. Her complexion and greenish hair made her look reminiscent to the unnamed alien species that Shahna (from TOS episode: "The Gamesters of Triskelion") belonged to.