Lwaxana Troi and the Wedding of Doom

Lwaxana Troi and the Wedding of Doom

50579.8
"Lwaxana Troi and the Wedding of Doom" was the 10th issue of Marvel Comics's 1996 regular series of Star Trek: Deep Space Nine comics. The issue was written by Michael Martin & Andy Mangels, penciled by Terry Pallot and inked by Al Milgrom. This story was lettered by Chris Eliopoulos and colored by John Kalisz.

Lwaxana Troi returns to Deep Space 9 seeking a divorce from Odo so she can marry again; several female residents of the space station disappear.

Odo is a pensive mood. Lwaxana Troi is returning to the station, but unlike previous visits by Lwaxana Odo is actually looking forward to it. His experiences as a solid make him wonder if he and Lwaxana may have a future together. Lwaxana soon shocks Odo, by asking for a divorce; she is getting married to a Bolian man called Var Ulos.

Lwaxana plans to hold the ceremony on the Promenade and Quark is to provide the catering and charge lots of latinum for it. Rom notices a strange substance in the side of Ulos' ship but Quark tells him to let his friends in waste extraction worry about it.

Captain Sisko gives his approval for the wedding to take place, but is shocked when Lwaxana asks him to officiate. Lwaxana also engages Garak to provide the formal wear for the occasion, forgoing the traditional Betazoid custom of nudity at weddings.

Ulos' assistant Ivia makes it known that she disapproves of his marriage. While walking in a corridor, Ivia is attacked by a green creature with tendrils and dragged away. After reporting to the night shift, Rom finds that technician Trinia Eltur is missing, and that her spanner has a green substance on it.

Preparations for Lwaxana's wedding to Var Ulos are proceeding apace. However, Ivia, Ulos' aide has disappeared, as has Trinia Eltur, one of O'Brien's engineering technicians. A strange material is found on Trinia's engineering tools, a material that Bashir determines came from an alien creature of some kind. When the same substance is found on a vest belonging to Ivia, Sisko gives an order to find the creature before any other women are taken.

Rom wants to help with the search, but Chief O'Brien wants him to go home to rest. Rom decides to help out anyway and talks to Sergeant Etana, who is investigating Ulos' ship. The substance that Rom noticed on the ship when it arrived is gone and he realizes that it was alive: and is responsible for the disappearances. A nearby air vent would have led it straight to the docking ring. When he contacts Leeta but doesn't get a response, he and Etana race to her quarters but Leeta is taken by the creature... 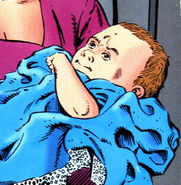 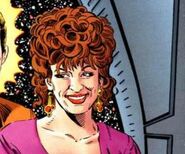