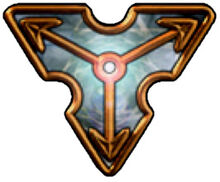 The Lyran Star Empire is the name of the official state of the Lyran species. Not much is known about it except that it is somewhat feudal with many Lyran Counts serving as rulers on other worlds. This also, unfortunately, has the side effect of resulting in many internal conflicts within the empire. This has prevented the race from actively stretching their rule to dominating the galaxy.

There are approximately 21 counties, each of which are ruled by a Count. Four of those counties are duchies which are led by a single Lyran Duke. The King Emperor of the Lyran Star Empire rules the 21st county. Each county pays and supports the Lyran fleet; providing it with necessary maintenance while the local county controls the local border stations. The duchies are known to make use of starbases.

The following are the list of the Star Empire's structure:

The Lyran Star Empire are an advanced species; making use of warp capable starships, disruptor weaponry and Expanding Sphere Generator technology that aids in their defence.

The Lyran Senate is an executive body tasked with the day-to-day administration of the Empire.

The Gorn Hegemony developed Gravitation Density Distortion Sphere technology which is said to be a creation of their own which works somewhat similar to the expanding sphere generator.