The Original Series No. 31

8903.6
Klingons vs. Federation… and to the winner—"Maggie's World"! "You've had your chance, Kirk! Now we're going to do things— my way!" – "Maggie's World!" was the 31st issue of DC Comics' 1989 series of Star Trek: The Original Series comics, released in October 1986. The issue consisted of a 22 page story, as written by Tony Isabella & Len Wein. The art was pencilled by Tom Sutton and inked by Ricardo Villagran, with Robert Greenberger credited as editor.

Personal journal, Newyear 9, Newday 298
Frankly, my feet are killing me. The phaser belt slapping rhythmically against my hip is bound to leave a bruise and I think I'm developing a cold. I'd really rather be somewhere else tonight, soaking my poor feet in a hot tub but unfortunately, I've got a job to do! You'd think after almost ten years of having so-called civilization thrust upon them, the local inhabitants would have learned some measure of civility. But not on this world; not on my world. Nothing is ever easy on Maggie's World!

Captain's log, stardate 8903.6
As per Starfleet Command, the USS Excelsior has rendezvoused with the USS Sturgeon just beyond the Neutral Zone, to receive a most important passenger and bid farewell to a friend.

Admiral James T. Kirk meets with Commander Thimon before the Andorian officer disembarks for Earth to retire from Starfleet. After Thimon transports to the Sturgeon, Ambassador Averill Stanton is transported aboard the Excelsior for escort to Magellan's World. The ambassador belligerently demands Kirk's cooperation, informing the admiral that he is in charge of the mission. Once Stanton leaves with his new aide, Lieutenant Maria Morelli, Kirk asks Commanders Chekov and Sulu for a briefing on Magellan's World and Ambassador Stanton.

Captain's log, stardate 8903.8
En route to Magellan's World, I have convened a private briefing with selected members of my crew. Objective: To alleviate a gnawing case of stomach distress.

Lieutenant Saavik details the history of Magellan's World, a planet discovered simultaneously by the Federation explorer Mace Magellan and the Klingon Empire. Magellan, elected provisional governor, divided the planet equally with each side given ten years to prove who was best suited to develop the planet. Based on current findings, the Klingons are noted as having made more impressive advances than the Federation colonists. Chekov adds that Ambassador Stanton was apparently assigned to Magellan's World because the situation is hopeless, but Kirk sees this as Stanton hoping to save a flagging career.

Personal journal, Newyear 9, Newday 298
Whoever said that there's no rest for the wicked certainly knew what he was talking about. First, that brawl at Ena's Place, and now a hurried call from Alisa Ruthven, over at the Federation Mining Installation. And if there's one lady who shouldn't be kept waiting, it's her!

Alisa Ruthven chides Magellan for his late arrival then claims to have something important to show him. She insists that the discussion take place in her office lest the Klingons discover the new ore samples. Ruthven claims she has found dilithium and asks for authorization to complete two months of heavy mining. Magellan denies her the authorization since it would involve environmentally-damaging mining techniques. Alisa angrily accuses Magellan of selling out to the Klingons. The provisional governor leaves with Ruthven claiming that all will change with the arrival of Averill Stanton.

Captain's Log, supplemental
Since the arrival of Ambassador Stanton, the temperature aboard the Excelsior, despite the automatic climate control, has grown decidedly cooler though the crew is doing its utmost to ignore the sudden chill…

When Lieutenant Morelli leaves Sulu to complete some last-minute work with Ambassador Stanton, Doctor McCoy and Scotty playfully tease Sulu about his relationship with Morelli. Soon afterward, Stanton dresses down Morelli for associating with the Excelsior senior staff and tells her that their careers are effectively "dead in the water."

Magellan relaxes as he tells Ena of Ruthven's sending for Federation mediation, lamenting that he may be out of a job in a few days.

Captain's log, stardate 8904.3
Establishing standard orbit around Magellan's World, we have discovered we are not alone—having come under the scrutiny of a Klingon D-7M-class light cruiser that achieved orbit just minutes, it seems, before we did.

As Ambassador Stanton complains about the Klingon presence, Kirk speaks with his sometime rival Captain Koloth. Meanwhile, down on the planet, someone bombs the Federation Mining Operation. 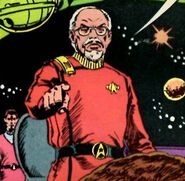 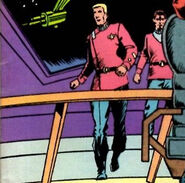 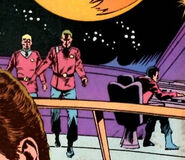 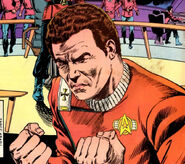 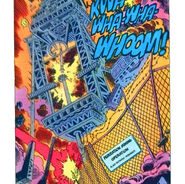 The destruction of the Federation mining facility. 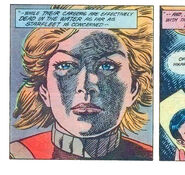 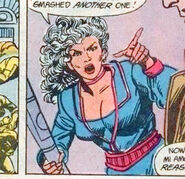 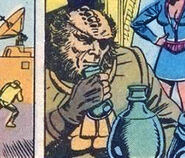 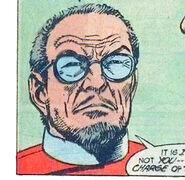