The Makar class was a Gorn starship class, a frigate in Gorn Space Command service in the 2260s decade. The Makar-class frigate shared its design lineage with the more ornate Ddraig-class cruiser. (STO - Agents of Yesterday mission: "In the Shadow of Cestus")

In the year 2270, the Na'kuhl manipulated the Romulans into disrupting the cooperative mining efforts between the Gorn Hegemony and the Federation at Edren IV. When the ruse was discovered, Makar-class frigates were part of the Gorn-Federation flotilla engaging the attacking Romulan Vas Hatham-class birds-of-prey and Khenn-class cruisers. (STO - Agents of Yesterday mission: "In the Shadow of Cestus")

Around the same time, the Na'kuhl manipulated the Gorn into attacking a starbase on the Federation border with a doomsday machine. The anachronistic assault by the Gorn ships was countered by a 5-ship flotilla from the Alpha Quadrant Alliance of the year 2410, which was disguised as 23rd century fleet. (STO - Reckoning mission: "Days of Doom") 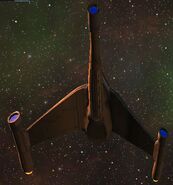 Ventral side
Add a photo to this gallery

Retrieved from "https://memory-beta.fandom.com/wiki/Makar_class?oldid=673238"
Community content is available under CC-BY-SA unless otherwise noted.