From the apocrypha of the trials of Kahless, second volume, first canto: To live is to battle. To battle is to survive. To survive is to conquer. To conquer is to be Klingon.

As the sun sets on a peaceful stone age world, a Klingon battalion arrives easily claiming the planet in the name of the Klingon Empire. Though Commander Blath is eager at their victory, Sho'Tokh is less so given the strength, or lack thereof, exhibited by the natives. In sharp contrast to the rites and customs of Klingon society, Sho'Tokh orders the execution of all prisoners, save the able-bodied men and fertile women, including the children. Blath's protests of this dishonourable act earn him a sword through the stomach, the rest of the troops now cowed into following their orders.

A month later, aboard the USS Enterprise, McCoy and Scott perform the risky procedure of beaming a child directly out of her mother's womb to safety. Though the procedure is successful, the father is not exactly grateful by McCoy touching his daughter. Only Khonodians may touch newborns before the fifth cycle given the uncleanness of other races. Later, McCoy rants to the bridge crew about the ungratefulness for his difficult act (an act as difficult as fishing a penny out of a fountain, during a snowstorm -- while bouncing on a trampoline) as well as pondering the paradox that even in the advanced age they live in, people still cling to outdated superstitions and myths. Before the debate can proceed, Uhura picks up a Federation distress beacon from the Artel system and Kirk orders a course set.

Under Sulu's command, the away team beams down to a dormant volcano and heads for the signal's source only to find a transponder rigged to mimic Starfleet signals. No sooner had Sulu made the discovery is Slattery shot dead and the Klingons jump out, clipping Sulu in the shoulder. As Kirk tasks Scotty to "invent" a way of beaming the away team up directly while ordering a red alert. As if on cue, the IKS Chonnaq decloaks off to starboard and opens fire.

On the surface, McCoy is seperated from the rest of the team and assualted by two Klingons. He manages to kill one before drugging the second for use as a Klingon shield Before he can advance however, he his way is barred by Subcommander Divash.

In orbit, the Enterprise manages to angle itself so it can target the weapons on Chonnaq. Though this ends the barrage, they are hardly out of danger. The engines are off-line, the shields are seconds away from collapsing and the Klingons have donned space suits, intending to manually board the craft. 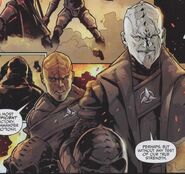 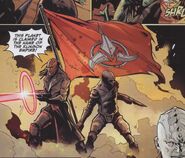 Flag of the Klingon Empire