Star Trek: Manifest Destiny #2 (of 4) continues IDW's bi-weekly miniseries, as Captain Kirk and the Enterprise crew face off with the Klingons in deep space... a conflict that could ignite all-out galactic war.

PREVIOUSLY IN STAR TREK
Manifest Destiny... : Deep in unexplored space, the U.S.S. Enterprise detects a Starfleet beacon on a desolate planet. Sulu, Uhura, and Dr. McCoy lead an away team to investigate, only to be ambushed by Klingon soldiers. In orbit a Klingon warship attacks the Federation flagship. It's ruthless captain now leads a face-to-face assault on the hull of the Enterprise...

Across the USS Enterprise rumours fly over the identify of their attackers before James T. Kirk takes command and outright says they are facing Klingons and that today, they are soldiers. Their objective is simple: Kill the Klingons. On the saucer, Sho'Tokh's boarding party is met by Kirk's force, a brutal firefight breaking out.

On the surface, McCoy attempts to use his shield as a hostage before Divash reveals she has captured the rest of the away team. After she agrees to not render any harm onto the humans, McCoy returns his prisoner who promptly slays himself for his weakness much to McCoy's disgust and only confirms his views of what savage barbarians the Klingons truly are.

On the hull, Kirk's party is stemming the tide while Spock finds himself outnumbered and outflanked. To even the scales, Kai makes the daring move of letting himself briefly float above their foes and guns them down from behind. As Sho'Tokh pierces the hull, he orders the IKS Chonnaq to send in the fighters to mop any resistance, over the protests that such an act will claim Klingon lives. Sardonically promising to remember the fallen, Sho'Tokh enters the Enterprise. Regrouping after the fighter barrage, Kirk can only mutter that such a tactic was unbecoming of a Klingon. Entering the ship, Spock believes the Klingon Empire has finally declared war on the Federation but Kirk disagrees. If war were to be declared, why is it being done so far from charted space? And why was the flagship itself lured out?

As the Klingons reach their shuttle, a crewman challenges Divash for the position of second-in-command only for the woman to casually kill him. As McCoy wonders how there are any Klingons left in light of their casual murdering of one another, Divash says the humans are going to help her kill her captain...

On the bridge, Pavel Chekov manages to evacuate the crew with less than a second to spare. Arriving too late, Kirk is ready to charge before Spock convinces him otherwise. Controlling a bridge and controlling the ship are not the same thing.

On the bridge, the invaders find themselves locked out of all systems. Unconcerned, Sho'Tokh sits in the captain's chair and orders the slaughter to commence. 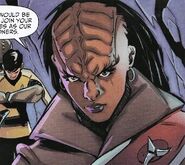 Subcommander Divash
Add a photo to this gallery

RI Cover by J.K. Woodward
Add a photo to this gallery

Retrieved from "https://memory-beta.fandom.com/wiki/Manifest_Destiny,_Issue_2?oldid=664175"
Community content is available under CC-BY-SA unless otherwise noted.