The Marrat Nebula is a nebula on the borders of Federation and Klingon space and a strategically important area to a dozen cultures including Arcturans, Khodini and Orions. Starfleet personnel have described this area as a "treacherous expanse of charged gas clouds and ion storms".

The Nebula's properties often make sensor and communications technologies unreliable and the region subsequently became an area popular with those fond of illegal activity. In response, Starfleet built Starbase 13 in the Marrat system to police the area, however the eventual result was for the starbase to become a target itself, provoking the nickname of "Fort Apache".

With escalating tensions in the Nebula, the USS Enterprise was called in to assist Starbase 13, and arrived just in time to drive off the most recent brigand attack. Kaaj choose this time to make his move and sent soldiers to the Pharos siteworld to claim the world back from the Federation. The Enterprise was sent to investigate the sudden loss of contact with the engineering teams on the planet and battle quickly ensued. With Kaaj threatening war and striking a crippling blow to the Enterprise Captain Pike saw only one way to prevent a more extended conflict. He fired on Pharos. The pure dilithium ignited and the planet became a huge fireball which burned for decades providing the navigational beacon the region required. (EV comic: The Fires of Pharos) 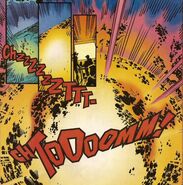 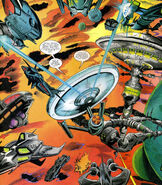 The extent of the Marrat Nebula is somewhat unclear whilst often been referred to as a significant region and large enough to accommodate alot of traffic and activity it is also sometimes exchanged for the Marrat system. This article is written on the interpretation that the Marrat system is a smaller area of the larger Marrat Nebula Region.

Retrieved from "https://memory-beta.fandom.com/wiki/Marrat_Nebula?oldid=87011"
Community content is available under CC-BY-SA unless otherwise noted.