Marsha Latham was a 23rd century Human woman. She served in Starfleet as a security officer with the rank of lieutenant aboard the Federation starship USS Enterprise in the 2270s under the command of Captain James T. Kirk.

In 2274, Kirk was aware that Latham was in a relationship with Sergeant Umeki.

That year, she volunteered to lead an armed security squad to Iskonia to rescue a landing party that included Kirk, Umeki, Spock, Leonard McCoy, and Hikaru Sulu. The team transported down at night wearing infrared targeting masks, but they were captured by Omnimind robots and taken within the Iskonian Main Dome. There, she was placed unconscious into a chamber that scanned her as the template for an Omnimind android, which the Omnimind considered the pinnacle of its goal to perfect humanity through cybernetics. After the android was disabled with phasers, Umeki was able to locate Latham, revive her and free her from the chamber. (TOS comic: "Restructuring Is Futile")

Not long after she recovered in sickbay, Kirk assigned her to a shuttle crew that included Sulu and four Bebebebeque, including their First High Councilor. The mission was to investigate the fate of a colony on Mimit, but the shuttle was shot down and crashed, knocking out its Human crew. A large Ravager ripped into the wreckage, but the Bebebebeque were able to stun it, then revive Latham and the others.

Latham thought they might be stranded, as Kzinti fighters were engaged against the USS Enterprise, but the team was rescued by Bebebebeque who'd been kept as slaves, then beamed to the Kzinti ground base. Armed with a laser rifle, Latham prepared to join Kirk and Sulu in a fire fight against the Kzinti. A savage invasion by hundreds of Ravagers kept the Kzinti distracted, however, and Kirk cleverly had the base beam several Ravagers aboard the lead Kzinti warship. As it veered out of orbit, Spock was able to transport Latham and the others back to the Enterprise. (TOS comic: "The Wristwatch Plantation")

Preparing to beam down. 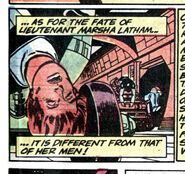 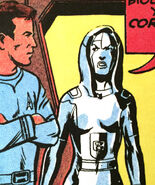 Omnimind android made from a template of Latham's body.