For other uses, see Masks.

The Next Generation No. 7

The U.S.S. EnterpriseTM journeys to Lorca, a beautiful world with a feudal culture where the inhabitants wear masks to show their rank and station. Captain Picard and an away team don masks of their own to begin a quest for the planet's ruler and the great Wisdom Mask that the leader traditionally wears. Their mission is to establish diplomatic relations.

But shortly after transporting, Picard and his party lose contact with the ship, and Commander Riker leads a search party down to the planet to find them.

Both men, are unaware that their searches, indeed, the ship's entire mission are part of the plan of a madman, a madman who is setting the stage for a trap that will ensnare both U.S.S. Enterprise landing parties, and leave him to seize control of the awesome Wisdom Mask as well as the planet Lorca itself.

The Enterprise travels to Lorca in the hopes of establishing diplomatic relations. The Lorcans are actually the descendants of two groups of Humans (anti-technologists and thespians) who settled the planet in the 22nd century. The colony lost contact with Earth almost immediately due to their own disinterest and Lorca’s violent volcanic activity, which rendered most technology inoperable. The ferocious environment also drastically reduced the population and hardened the survivors into a feudal warrior society. Masks took on an integral part of this new culture; they are worn constantly and denote one’s position within the social hierarchy, and frequent duels over the ownership of the masks can be used to improve one’s station. The minimal government is run by whoever wears the prized Wisdom Mask—currently a man known as Almighty Slayer, though he hasn’t been seen for years.

The cocky and well-traveled Ambassador Fenton Lewis is assigned to represent the Federation to the Lorca. He bears the Ambassador’s mask, though it is later learned that he procured it unscrupulously; dealings with Ferengi business partners deteriorated and he killed them in self-defense, taking the mask when he fled. His misdeeds are unknown in the Federation, but the Ferengi have put a price on his head. Jean-Luc Picard, Deanna Troi, and Worf accompany Lewis to the surface, garbed in replicated Halloween masks to prevent a cultural misunderstanding. However, they quickly lose contact with the Enterprise, as a nearby volcanic eruption spews magnetic ash into the air, disrupting all of their equipment. The away team meets a warrior band led by the formidable Piercing Blade, who successfully challenges Lewis’s right to wear the Ambassador’s Mask. Picard, in turn, challenges Piercing Blade to secure her help in their quest (rather than becoming her new pages), and wins by cheating, having Worf subtly stun her mid-fight. The Lorcans are fascinated by the offworlders’ strange masks and trade for them. Piercing Blade’s party is headed for a massive festival, where she intends to name herself queen by default or by challenge. The warrioress takes great interest in Picard and they become intimate.

Will Riker, Data, Doctor Katherine Pulaski, and several security officers beam down in an effort to find the captain’s missing party. They fall in with Day Timer, an elderly traveling peddler, and pose as his apprentices to continue their mission. While traveling through a village, they meet maskmaker Trim Hands, and find a clue left behind by the missing team. The officers are heralded as heroes after they help to repel a raiding party that attacks the village, and are awarded new masks and the status that goes with them. Riker receives the noble Forest Mask. Lewis slips away from Picard’s group in the middle of the night, eventually making contact with Riker’s team, though he tells the first officer that Picard, Troi, and Worf are dead, murdered by Piercing Blade. The team continues on to an upcoming festival, but is confronted by a party of raiders and their Ferengi allies. Riker calls the starship and has Wesley Crusher arrange a distraction so they can escape. However, the diversion—a low-yield torpedo detonated within a volcano—is much larger than intended and causes a string of intense eruptions. Day Timer’s cart is destroyed, and he reveals himself to be Almighty Slayer, having been in hiding all these years to avoid the constant challenges to his authority.

Lewis tries to murder Slayer and steal the Wisdom Mask, though Data anticipated the threat and traded places with the monarch. Lewis flees, finding Piercing Blade’s party nearby. He directs her to Slayer’s camp, and she goes to challenge her long-absent father for the right to rule Lorca. Picard, Troi, and Worf watch the meeting from afar, but soon learn of Slayer’s companions and the Starfleet crew are reunited. Piercing Blade defeats Slayer, but does not kill him, and Lewis uses the multiple reunions as a distraction. He kills security officer Ensign Greenblatt, steals the Wisdom Mask, and runs off into the forest. Picard, Riker, and Worf pursue, but are unable to catch Lewis before he reaches the raider/Ferengi encampment, protected by a force field. Lewis offers the Ferengi a deal, but instead they kill him for the bounty on his head and claim the mask for themselves.

Most of the Starfleet team return to the ship. Riker, Slayer, and one of Blade’s followers move to infiltrate the camp as mercenaries, but they find everyone there dead, having killed each other for the Wisdom Mask. They take the mask and present it to Piercing Blade, who dons it at the festival and becomes queen of Lorca. She begins instating many new policies to end the bloody feuding and make their society safer. She also commissions Trim Hands to design a "Federation Mask" to be worn by offworlders, and invites the Enterprise crew, especially Picard, to come down to Lorca for shore leave. 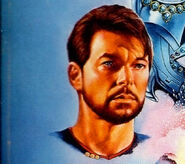 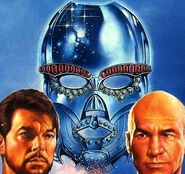 About a third of the way into the novel, Geordi and Wesley visit Ten-Forward and talk briefly with Guinan. Picard's away team is missing on the planet, and the crew has been unsuccessful in locating them. Geordi makes a brief, off-hand comment to Guinan about how *she* could get the away team back, which Guinan pointedly ignores. This is likely a reference to the unresolved rivalry between Guinan and Q in "Q Who?", after which many viewers assumed Guinan must have powers to rival Q (after his obvious anxiety at realizing she was aboard the ship), but which was never addressed again in any format. For the purposes of the Memory Beta Chronology, that would place this novel sometime after "Q Who?".

Retrieved from "https://memory-beta.fandom.com/wiki/Masks_(novel)?oldid=661254"
Community content is available under CC-BY-SA unless otherwise noted.