Hearts and Minds No. 4

2370
"Masters of War" was the fourth and final issue of Malibu Comics' 1994 Hearts and Minds miniseries of DS9 comics. The issue consisted of 25 pages of story by Mark Altman. The art was penciled by Rob Davis and inked by Terry Pallot, with Mark Paniccia credited as editor.

In the Gamma Quadrant, Lieutenant Commander Dax and Dr. Bashir are escorted by their Romulan captors to a detention cell while Koleth is taken to another room. Dax demands to see the officer in charge but is denied. The guard states that T'alar will see her when she is summoned. From their cell Dax and Bashir see the Arvas landing.

Science officer's log - supplemental
Our investigation of the destruction of a Klingon vessel in the Gamma quadrant as lead us to discover a secret Romulan base on a planet. On a planet in a real of the Gamma quadrant know as "Abyss", we have been captured and incarcerated at this Romulan base. For what purpose, we can only guess.

Maura is entertaining her customers when Major Kira walks in. She tells Maura that they need to talk, she informs Maura that Commander Sisko demands to see her now. Once in at the security office he asks her what she is transporting as cargo. She replies that he probably already knows, which he confirms by showing one of Romulan disruptors found by Morn.

Maura decides to come clean on her identity and tells the commander that she is in fact a smuggler transporting weapons to a group of rebels fighting the Dominion. Kira does not buy a word of it and roughs up Maura, Sisko intervenes. He asks her again what was the Arvas' destination but she tells him that only Delgar knows. She is then placed in the brig and reminds her that if anything happens to Odo on board the Arvas, he would hold her responsible.

Dax and Bashir are talking in their cell when a guard comes in to inform them that Commander T'alar invites them to dinner. On their way their Bashir shares his worries on Koleth's fate. Once at the dinning table T'alar introduces himself and explains that he has been keeping track of their investigation since they left the station. He further explains that his informant on Caldonia III notified him that they had found that the IKS K'Tang had traveled into the Abyss and it was a matter of time before the base was discovered.

Bashir bluntly asks about Koleth's fate, T'alar tells him that he is not dead, yet. Dax asks how the K'Tang was destroyed, as she explains that she as already figured out that they were trying to prevent the other powers of gaining a foothold in a new quadrant. Bashir tries to defend Federation ideals but T'alar orders two centurions to escort him back to his cell. T'alar mentions the long life span of the Trill which leads Dax to tell him the story of Pakel a Romulan encountered many decades ago and who acted honorably by helping one of the Dax's host after his shuttlecraft had crash landed.

Dax is taken to the operations center of the base, where T'alar takes her thru the events that lead to the destruction of the K'Tang.

On DS9, Dukat grows impatient the Klingon delegates being so late, when a furious Captain Kol enters the room he immediately asks Marok about the Cardassian fleet. Dukat calmly states that they are just performing military exercises. Kol calls Marok a bigger liar than Dukat when he confirms Dukat's statement. Sisko tries to reason with Kol before he storms out of the room, calling off all negotiations. Marok calls Kol a fool as he will make them all pay a high price for his avenging honor. Before Dukat returns to his ship, Sisko urges him not to engage in any offensive actions. Dukat makes no promises but to fight back if attacked. Sisko orders Chief Engineer O'Brien to have all runabouts launched and assume position around between Kol and Dukat's ships. He also wants O'Brien on board the USS Rio Grande.

By the time Sisko gets to ops Kol is already on the viewscreen questioning Sisko's "treachery". He explains to Kol that he is still responsible for the security of the Cardassian ship while it is in this sector. In the security office Maura uses a device to deactivate the force field to her cell. The Starfleet security officer reaches for his phaser but is knocked out. Maura grabs the phaser and runs towards the Promenade. A Bajoran officer informs Sisko of Maura's escape, who sends Kira after her. Once on the Promenade Maura shots and kills another security officer who spotted her and keeps running towards Quark's.

Quark shares a drink with Morn when Maura enters and takes him hostage. Before they can get away phaser fire forces them into a hidden tunnel where she threatens Quark to take her to the closest launching pad. Once at the pad, they discover Kira waiting. She orders Maura to surrender but Maura threatens the life of Quark instead. Kira stuns her with a shot to the chest. Quark thanks the Major for saving him thought he is surprised that she fired. Kira explains that it was a safe bet that she had the intention to kill him both if she had lowered her phaser.

At the Romulan base, Dax is escorted back to her cell by T'alar who offers to take Dax back to Romulus once he is relived of duty, an invitation she refuses. Dax explains to Bashir what she learned from T'alar when Odo opens the door to their cell. He gives each of them a disruptor. Before they can escape Bashir insists on finding Koleth and heads to search while Odo and Dax run to the USS Orinoco.

At Deep Space 9 six Galor-class ships enter the sector. They prompt Sisko to order the runabouts to circle Kol's ship, hoping the Cardassian would avoid firing on Federation ships.

Bashir finds Koleth in a mind probe device and freeing him, they make their way to the runabout while chased by Romulans. Odo transports them aboard and they leave the atmosphere of the planet. A Romulan Warbird in orbit of the planet gives chase to the runabout who heads to the Bajoran wormhole. At the station more Klingon ship enter the system. When all seems lost the wormhole opens up and the Orinoco comes through followed by the Romulan ship which is greeted by the disruptor fire of the Klingon fleet.

Once all is settled, Odo visits Quark at his bar and teases him about giving him back the contract that he signed to Maura. 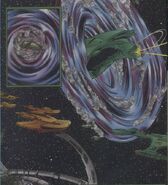 IRW Steel Bird and USS Orinoco among others. 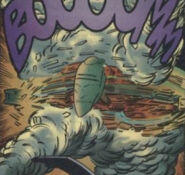 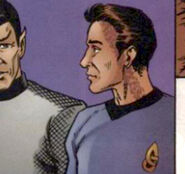 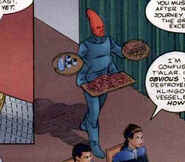