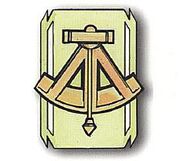 Captain R.M. Merik, after failing to complete the required courses at Starfleet Academy, became an officer in the Merchant Marine. He was commander of the SS Beagle. (TOS episode: "Bread and Circuses")

Retrieved from "https://memory-beta.fandom.com/wiki/Merchant_Marine?oldid=679400"
Community content is available under CC-BY-SA unless otherwise noted.