For other uses, see Metamorphosis.

"Metamorphosis" was the 31st episode of Star Trek: The Original Series, the 2nd episode of the show's second season, first aired on 10 November 1967. The episode was written by Gene L. Coon and directed by Ralph Senensky. It was novelized in Star Trek 7 by James Blish and adapted as a fotonovel in 1978.

Fotonovel introduction
Though amazing discoveries and fascinating achievements mark the 25th century [sic], some things have not changed. Life itself may be far different, but death remains the same. Man's mortality cannot be denied and his desire to postpone his end still remains an unfulfilled quest.

But not for James T. Kirk, Captain of the Starship Enterprise. Forced down to a strange planet by an omnipotent cloud-like creature, Kirk is offered the incredible gift of immortality.

Surely he will gratefully embrace such an opportunity. But, no! Kirk soon finds out that the price he is expected to pay in return for everlasting life is far too dear. For him, there is something more precious than eternal life. So precious in fact, that he'd rather risk death than submit to such a… Metamorphosis.

Ship's Log, stardate 3219.4.
Lieutenant Commander Scott reporting in the absence of Captain Kirk. A shuttlecraft bearing the Captain, First Officer Spock, and Chief Surgeon McCoy has been sent to Epsilon Canaris III. There they are to pick up Assistant Federation Commissioner Nancy Hedford and bring her back to the Enterprise for emergency medical care. We are due to rendezvous with the shuttlecraft in exactly four hours 29 minutes. (fotonovel)

Captain's log, supplemental entry.
I and my party have been trapped on Gamma Canaris N by a strange cloud-like creature. Apparently its motivation was to provide playmates for Zefram Cochrane who has been marooned here for the past 150 years and has named the creature The Companion. One of our party suffers from a rare disease and if we don't reach the starship quickly, she will die. First Officer Spock has devised a machine that hopefully will knock out The Companion's power. It may work, it may not. But it is our only chance. (fotonovel)

Ship's log, stardate 3219.8.
Lieutenant Commander Scott reporting in the absence of Captain Kirk. A shuttlecraft bearing the captain, the first officer, Chief Surgeon McCoy, and Assistant Federation Commissioner Hedford is now definitely overdue for a rendezvous with the Enterprise. We are attempting to backtrack it. (episode and fotonovel)

Ship's log, stardate 3220.3.
Lieutenant Commander Scott reporting in lieu of the Captain and the first officer. We are continuing our search for the missing shuttlecraft. (episode and fotonovel)

Zefram Cochrane and/or the Companion later appeared in the following adventures:

The following episode depicts one of the first Earth vessels to use warp drive: 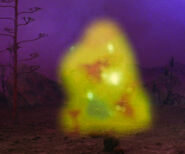 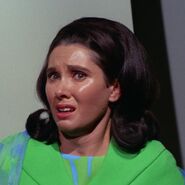 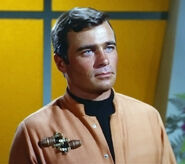