The Original Series No. 27

The tranquil planet of Aritani has suddenly come under attack by a vicious and unknown enemy. The Enterprise rallies to the scene, only to plunge into a deadly nightmare: Spock is found mysteriously injured, his mental powers crippled and weak, and Kirk uncovers an evil Romulan plot—with a cunning double agent in the middle.

As Spock begins to regain his memory, Kirk strives to expose the agent. But only Spock's knowledge can stop the Romulans… from controlling the universe!

The Enterprise has answered a distress call from the planet Aritani; they are being raided by pirates, their people and land wrecked. Shortly after arrival, Spock is badly injured in a fall while exploring alone and suffers brain damage. The Enterprise crew install a planetary shield and, once they are convinced no cloaked vessels could be hidden under it, crewmembers beam down for shore leave. However, the pirate ships then attack, killing eight crew.

A neurologist, Emma Staenz, arrives on the Enterprise to treat Spock and prescribes neodopazine. Alone, she forcibly mind melds with him to learn what he saw on the surface, then erases his knowledge of the encounter. She tries to have him sent to a mental institute but instead he is sent back to Vulcan to be looked after by his family. Staenz causes further tension on the ship by romancing both McCoy and Kirk.

The Enterprise captures one of the pirates, a Romulan, but someone murders him in the brig. They are then assigned to transport a delegation to Vulcan to discuss offering further aid to Aritani. En route, two delegations are attacked and an ambassador and an aide are murdered. Kirk finds Staenz has a private communicator but learns she is acting under orders from Admiral Komack. The Enterprise's replacement first officer, Varth Regev, is detained when he is also discovered to have such a device.

Spock recovers and tells Kirk and McCoy that the neodopazine was designed to worsen his condition. Staenz manages to escape from the Enterprise. Spock recalls that the Romulans were building a weapons facility capable of disintegrating its target on Aritani, taking advantage of its mineral deposits. Using co-ordinates provided by Varth, an agent of Starfleet Intelligence, Kirk and Spock infiltrate the underground base.

Kirk is captured by Staenz, in reality Romulan Subcommander Tanirius. She admits she was behind the murders, under orders from the Praetor, but her true loyalty is to a Romulan movement who seeks peace with the Federation and she has been working with Varth. She sends Kirk and Spock back to the ship while she sabotages the facility's weapons, promising that she doesn't plan to die. Six fighters are seen leaving the facility shortly before it self-destructs and kills the personnel left behind. 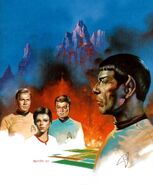 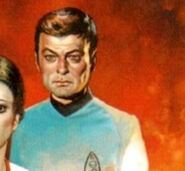 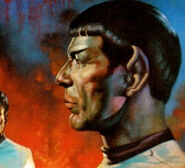