The Star Trek mini-series event of the year kicks off! Captain Jean-Luc Picard will stop at nothing to get his hands on the Empire's newest warship, the ISS Enterprise, be it lies, deception... or murder. With enemies and allies around every corner, Picard's quest to help the Enterprise and restore the Empire to glory will not be an easy one. Good thing he has a crew onboard who will also stop at nothing to ensure total victory – at any cost.

Space... The final frontier.
These are the voyages of the I.S.S. Enterprise. It's continuing mission: to conquer strange new worlds, to enslave new life and civilizations... To boldly go where no one has gone before!

All things are possible in the multiverse. Every permutation and combination of events exists somewhere. One such world is built on conquest and power. In 2267 however, that world's natural course was altered by a visitor from another world. That visitor convinced Spock that the Terran Empire was an unsustainable model and should be reformed into a more peaceful government. Unfortunately, such an act left the Terrans open to assault by the Klingon-Cardassian Alliance who totalled the Terran fleet and sent them running back to Earth's solar system. Rumours then quickly spread across the Alpha Quadrant about the once mighty Empire's demise. But rumours are untrue...

Though rundown and decrepit, the Terran Empire has managed to endure into the 24th century. In his quarters aboard the ISS Stargazer, Jean-Luc Picard contemplates the importance of patience and counter-plans before he is summoned to the bridge. Speaking with Deanna Troi in the turbolift, the Inquisitor reports she is sensing genuine faith among the crew regarding the new warship being constructed by the Empire, Picard scoffs at that, confident that his spies would have informed him of such a ship. The Inquisitor idly remarks however that perhaps, after all this hardship, some people just want hope to keep going.

On the bridge, Data draws Picard's attention to a damaged Galor-class cruiser limping on the outskirts of the solar system. With no other Cardassian ships around, the crew decides to risk an attack. Dropping out of the warp, the Stargazer opens fire with surgical precision, taking out a wing and flushing the crew into space, save a randomly chosen two for interrogation.

On their way to Mars, Picard drops in on Data testing out new arm modifications. Despairingly, Picard points out he would like to see the android utilize his remarkable intellect to create rather than simply improve on existing technology. Data then joins Barclay in the mess hall where the two witness two crewmen arguing about the mysterious new warship's existence. Ushering his friend out, Barclay apologizes to Data for witnessing humanity at its lowest. On the contrary, Data found the experience...illuminating.

Arriving in the Martian orbit, Picard despairs at the run-down state of the yard before he beams down with an away team to log his bounty. Unsurprisingly, the acquisitions officer is not singing Picard's praises. Ever since the fall, the Empire has been losing resources and steadily been reverting into a barbaric state of feudal warlords. Making their way to the general mess, Data hacks into the systems and discovers something wonderful.

In Picard's quarters, Data shows him the information he downloaded. The mysterious warship, the ISS Enterprise-D, does indeed exist. Even better, the technology aboard it outpaces anything the Klingons and Cardassians have. And even better, the vessel is only days away from launch. Unfortunately Data doesn't know where the Enterprise is. Unwilling to stop with such a prize to claim, Picard makes a desperate look for any useful information and spies a familiar name on the crew manifest: Geordi La Forge.

In the Martian city, La Forge reports to Dr. Sanchez and Bruce Maddox about microscopic cracks he has detected aboard the Galaxy-class only for his concerns to be condescendingly waved off. As La Forge fumes, Picard and Data drop by for a drink and tell him of their plans. Though La Forge normally hates cooperation, he can swallow working with Picard again, the captain was always a fair man. But in exchange for his help, La Forge wants to be the ship's chief engineer, with lavish quarters and the largest share of all profits after Picard's own. After a moment's consideration, Picard agrees.

Outside, La Forge shows Picard where the Enterprise is: in orbit of Mars itself. Picard initially scoffs at that but La Forge explains that the shipyard is surrounded by a cloaking net. An imperfect net at that. If one stands in just the right spot, one can take advantage of Mars's thin atmosphere to sneak a peak at the ship, as La Forge instructs Picard to do. 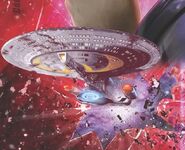 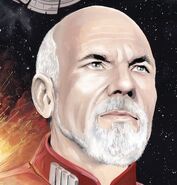 ISS Stargazer.
Add a photo to this gallery

RI Cover B by Joe Corroney.

RI Cover B by Adam Rosenlund.
Add a photo to this gallery

Retrieved from "https://memory-beta.fandom.com/wiki/Mirror_Broken,_Issue_1?oldid=669026"
Community content is available under CC-BY-SA unless otherwise noted.