In the sinister Mirror Universe, Captain Jean-Luc Picard is determined to get his hands on the Terran Empire's new secret weapon, the Galaxy-class warship known as Enterprise, by any means necessary. Unfortunately, one obstacle stands in his way-and his name is William T. Riker!

Space... The final frontier.
These are the voyages of the I.S.S. Enterprise.
Its continuing mission: to conquer strange new worlds,
to enslave new life and new civilizations...
To boldly go where no one has gone before.

In the otherdimensional Mirror Universe, there is no United Federation of Planets, only a cruel Terran Epire, where advancement comes through assassination, brutality is commonplace and kindness is a weakness. The Terran Epire is on its last legs in its war with the Klingon-Cardassian Alliance, but Captain Jean-Luc Picard has learned of a final chance for victory: a revolutionary new Galaxy-class starship that could turn the tide of the war. The ship is called Enterprise. And Jean-Luc Picard intends to take it.

Aboard the ISS Stargazer, Picard, following an assassination attempt by a crewman who could stand to work on his cardio, meets with his senior staff to hand out their assignments on seizing control of the ISS Enterprise-D. Data and Barclay are to work closely with Geordi La Forge in transferring the command codes. The Inquisitor is to see to the crew aboard the Stargazer and find out the most loyal among them. And just to cement their hold on the Enterprise, Picard would also like her to get in touch with the ship's first officer: William T. Riker.

In the bar, the Inquisitor sits each crewman down and gets a feel on their loyalty to Picard. The Inquisitor eventually manages to pick out the 100 most loyal crewman (or at least the ones who aren't actively disloyal and/or can be bought), though Picard points out that all that will be for naught if La Forge can't get them on the ship. In the Martian city, La Forge meets with Leah Brahms and manages to sweet talk her into joining Picard's cause. Using her security clearance, Brahms boards the Enterprise and reassigns the command codes and authorization protocols.

In the shuttle bay, Data and Barclay begin cannibalizing the bay for parts on a construction project.

In a Martian bar, Riker waits for the Inquisitor to arrive only to be met by Picard. Brought to a private booth, Picard informs Riker of his plan and offers him a spot aboard, certainly it would be better than serving under Jellico. Picard's confidence soon wears on Riker's patience and a barroom brawl breaks out, scaring off the other patrons. 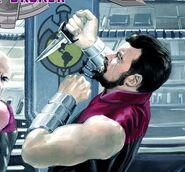 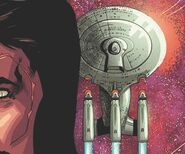 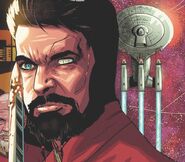 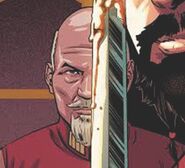 William T. Riker.
Add a photo to this gallery

Retrieved from "https://memory-beta.fandom.com/wiki/Mirror_Broken,_Issue_2?oldid=669025"
Community content is available under CC-BY-SA unless otherwise noted.