The ISS Enterprise is finally under the command of Jean-Luc Picard, and he's on the hunt for enemy warships, looking to strike back for Earth! But Picard's crew will find themselves under attack from both sides, as the Empire will stop at nothing to regain its secret weapon!

Space… The final frontier.
These are the voyages of the ISS Enterprise. It's continuing mission: to conquer strange new worlds, to enslave new life and civilizations… To boldly go where no one has gone before!

In the other-dimensional mirror universe, there is no United Federation of Planets, only a Terran Empire, where advancement comes through assassination, brutality is commonplace and kindness is a weakness. The Terran Empire is on its last legs in its war with the Klingon-Cardassian Alliance, but Jean-Luc Picard has learned of a final chance for victory: a revolutionary new Galaxy-class starship that could turn the tide of the war. The ship is called the Enterprise, and Jean-Luc Picard intends to take it. Having assembled a crew of co-conspirators , including the Enterprise's first officer, William T. Riker, Picard puts in motion his master plan to claim the ultimate prize: a warship that could tame the galaxy.

Aboard the ISS Enterprise-D, Data and Barclay tend to an isolation pod in the shuttle bay. Within is an odd alien, allegedly the last of her kind, known only as Guinan. Though quite possibly mad, Picard has learned to trust the alien woman's counsel. With some amusement, Barclay notes that both Guinan and Data are misfits that the otherwise brutal Picard has taken a liking to. Agreeing, Data asks if Barclay also counts among those misfits.

In the observation lounge, Picard heartily pats everyone on the back but notes that they're still lacking in numbers to properly staff such a large ship. The Inquisitor offers the obvious solution: Take on more crewmembers who can be bought. Picard adamantly refuses, insistent on only employing those completely loyal. The Inquisitor then points out another problem: Lieutenant T'Su is their only qualified navigator. Though Leah Brahms could fill that role, she's currently passed out drunk in her quarters. A stroke of inspiration strikes Picard and he suggests taking on Wesley Crusher as an officer-in-training.

Arriving at Neptune Station, Picard dumps off the few Jellico loyalists left, even allowing Teusta Fonn to use a few for his neurological experiments. In Ten-Forward, the Inquisitor seeks out Riker. Not to remind him of his place but rather to point out, he could one day have the Enterprise for himself. In sickbay, Beverly Crusher vocally protests conscripting Wesley before she is overruled by an unlikely voice: Wesley himself. He knows how the systems work and he's eager to prove himself. Satisfied, Picard tells him to find a quartermaster.

In uniform, Wesley enters the bridge with Picard. As the captain speaks of the imminent changes ahead, the ISS Arnold, ISS Horatio and the ISS Stargazer (no doubt fully crewed) drop out of warp, with Walker Keel demanding that Picard surrender the Enterprise. When the captain predictably refuses, the three ships open fire yet only manage to drop the shields by 3%. A single bolt from the Enterprise by contrast drops the shields on the Horatio to 36%. As the Enterprise unleashes her weapons on her peers, Riker notes they have a new problem…

…the Klingon-Cardassian Alliance has arrived to inspect the Enterprise. 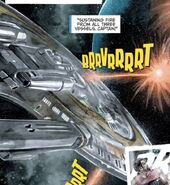 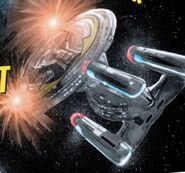 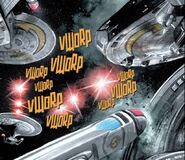 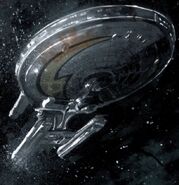 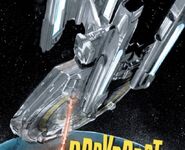 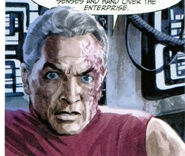