The Original Series/The Next Generation

Star Trek: Mirror Images is a five-part comic miniseries published by IDW Publishing starting in June 2008, the omnibus was released in February 2009. The series was written by Scott and David Tipton and illustrated by David Messina. The series includes a four-part Star Trek: The Original Series story, and a single issue Star Trek: The Next Generation story, both set in the mirror universe.

The main story of the series is a four-part TOS story depicting events in the mirror universe prior to the episode "Mirror, Mirror"; showing the rise of James T. Kirk through his plots to unseat Captain Christopher Pike from command of the ISS Enterprise. The third issue of the series was a flash-forward to the 24th century, showing how Jean-Luc Picard took command of the ISS Starbreaker.

Commander James T Kirk plots to assassinate Captain Christopher Pike and take command of the ISS Enterprise himself. An attempt through sabotage of the captain’s shuttle fails, so Kirk conscripts Spock and McCoy to obstruct Pike’s investigations of Kirk, and Scotty to install a piece of secret alien technology—the Tantalus field—to be delivered to Kirk by Orion pirates. Kirk masks the rendezvous as an illicit weapons/dilithium trade and is able to get the field onboard before ensuring that the Orions will not live to tell anyone of their delivery. However, the alien device proves difficult and Scotty takes longer than expected to install it.

Meanwhile, the Enterprise is ordered to Rashdin VII to retrieve a crashed experimental Klingon vessel. Pike orders Kirk to command the landing party and orders the security team to ensure that Kirk doesn’t survive. On the surface, the team finds the destroyed warship inhabited by large native beasts, who tear most of the party to shreds. Only Kirk and survive, and Kirk returns to the Enterprise with valuable intel on Klingon technoloy, successful in his mission. Frustrated, Pike assigns Kelso to eliminate Kirk, but Kelso himself is discorporated moments later by the Tantalus field. Pike throws McCoy in the agony booth to find out what Kirk has planned, and learns about the Tantalus field hidden in his quarters. He confronts Kirk and the two men fight until Kirk’s bodyguard intervenes, allowing Kirk to eliminate Captain Pike. Kirk assumes command and appoints Spock as his first officer, per their arrangement.

These events are contradicted by Shards and Shadows: The Greater Good.

As Starfleet fights a losing war with the Alliance, the ISS Starbreaker is intercepted by a Cardassian-Klingon task force. The logic-bound Captain Storl fails to defend his ship and several crewmembers are killed in the battle. Lt Picard assassinates Storl and takes command himself. He invents the Picard maneuver on the spot in order to escape the ambush, and his crew hails his leadership.

This story contradicts the events of Stargazer: Three and The Sorrows of Empire.

The series was originally announced as a four-part series, and was to have Chris Ryall as a third writer. Additionally their were plans for a second Mirror Images miniseries set in the TNG era[1], this eventually evolved into the Myriad Universes miniseries The Last Generation and the addition of a fifth issue to this miniseries, putting a TNG flash-forward midway through the otherwise TOS story.

Prior to the publication of the series, author Keith R.A. DeCandido suggested efforts were being made between IDW and Pocket Books to keep the series consistent with the prose mirror universe fiction recently released by the Pocket. [2] However the short story "The Greater Good" published a few months after the completion of this series gives a contradictory account of Kirk's rise to captaincy. 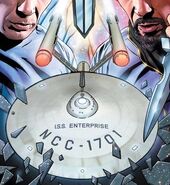