The Original Series (IDW ongoing) No. 15

2258.56
"Mirrored, Part 1" was the fifteenth issue of IDW Publishing's ongoing series of Star Trek comics, published November 2012. The issue consists of the first part of an Kelvin timeline version of TOS episode: "Mirror, Mirror", as adapted by writer Mike Johnson with issue art by Erfan Fajar. Colors and lettering by Ifansyah and Sakti Tuwono of Stellar Labs and Neil Uyetake, respectively. This comic was edited by Scott Dunbier, with Roberto Orci credited as creative consultant.

In the alternate reality, Scott and McCoy talk about parallel universes. Scott suggests that there are an infinite number of parallel universes. McCoy realizes that that means infinite versions of himself and Scott. Scott agrees and comes up with an idea of a universe in which he is a poet. McCoy dislikes the idea. Scott proceeds to tell a story about a mirror universe that is the polar opposite of the one they live in.

Captain's log, stardate 2258.56
Qo'noS. The Klingon homeworld. The day a new reality is born. The war is over. Hundreds of thousands dead on both sides. Entire worlds shattered. Finally it ends here, in the very heart of the enemy. The Terran Empire rules the galaxy alone. It is only logical.

In an alternate mirror reality, Spock and Hikaru Sulu kill Chancellor Gorkon. Sulu then informs Spock that Kirk has won Praxis, but is now on Rura Penthe seeking revenge on the Romulan who killed his father. Kirk strangles Nero to death and takes his ship. Scott and McCoy join him on the Narada. Spock does not trust Kirk, but Uhura convinces him that Kirk will not commit treason. Unfortunately, Kirk does, and Sulu, Chekov, and Uhura join him. Kirk insults Spock. Kirk decides he has had enough of Vulcans being equal in status to Humans and destroys the ISS Enterprise. His next target is Vulcan. 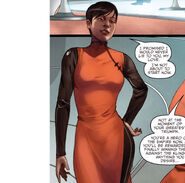