2372
Mirrors & Smoke is a comic by IDW Publishing, set in the mirror universe. It was announced at San Diego Comic Con by IDW Publishing on July 18, 2019, and presented by StarTrek.com on the same day. (StarTrek.com website: FIRST LOOK: 'Voyager' Warping to the Mirror Universe)

Written by Paul Allor (G.I. Joe) with painted art by Star Trek fan-favorite J.K. Woodward (illustrator of the beloved Mirror Broken storyline), Voyager: Mirrors and Smoke introduces Captain Janeway of the Voyager, a rebel ship stranded in the Delta Quadrant, far from the ruins of the Terran Empire. When Janeway crowns herself Pirate Queen of the Quadrant, the locals – including scavengers Neelix and Kes – won’t give up without a fight. Amid this conflict, the crew of the Voyager has a second problem on their hands: just who is the Terran calling herself Annika Hansen, and can she be trusted?

2372. Rebel ship Voyager- captained by Kathryn Janeway, an escaped slave from a brutal Cardassian mining facility--is flung halfway across the universe. Stranded in the Delta Quadrant, Janeway and her ragtag rebel crew are with a choice. Find their way home, or quietly forge a new life far away from Klingons, Cardassians, and the Rebellion?
Janeway chooses the third option. The Voyager will stay. The Voyager will plunder. The Delta Quadrant will be hers, and she will be its Pirate Queen.
A year later, she well on her way...

In the mirror universe, in the lawless Delta Quadrant, the ISS Voyager trades shots with the Baxial, crewed by the scavengers Neelix and Kes for the shuttlecraft held in its tractor beam. When the shuttle tries to break free of the beam, Kathryn Janeway orders Harry Kim to fire on the tractor beam emitter. At Janeway's command, the shuttle's sole occupant is beamed onto the bridge. Disheveled, Annika Hansen materializes, assuming that the crew is here to save her.

In sickbay, the Doctor identifies Hansen as the daughter of two Terran scientists with the woman confirming that, when she was five, her parents were assimilated by the Borg. Speaking with Chakotay, Janeway scoffs at the existence of the beings that Hansen described before the ship drops out of warp. This proves but the first of many faults as the replicators and the gravity generators turn against the crew with a variety of injuries piling up in sickbay, the injured turning suspicious glances toward Annika.

In a senior staff meeting, while Janeway is reluctant to execute Annika, the first Terran that they've seen in years, she is prepared to do it before ordering Aaron Cavit to investigate other potential causes of the malfunctions. While in a shuttle bay, the airlock closes before the bay vents, Chakotay kicking Cavit out of the ship.

Determined, Chakotay stalks to the sickbay, convinced that Annika is the cause of everything and demanding to know who her accomplice is before he is knocked out by the Doctor who contemptuously corrects the man. Annika is his accomplice. Seizing control of the whole ship, the Doctor reveals himself as a fully sentient being, having gained his awareness thanks to the crew carelessly leaving him on, and that he's turning on the crew given how they've treated him like a tool and Annika hasn't.

As the Doctor and Annika, wearing a space suit, shut down the life support, Janeway crawls to a panel and sends out an SOS to the Baxial.

Beaming aboard the ship, Kes' powers quickly wreak havoc before she distorts the Doctor's light-based form, resetting his program. Though Annika tries to avenge her partner, she too is quickly subdued. When Neelix tries to call in a favour from Janeway, she casually enacts "Protocol Seven" summoning the reset EMH to her location who subdues Kes. Thanking Neelix for resetting the holo-program, Janeway orders him taken to the brig where Annika offers an alliance.

With two vessels under her command, Commodore Janeway wonders where they should head next. Inspired by Tuvok's suggestion of augmenting their defensive capabilities, Janeway orders a hunt for the Borg that Annika mentioned.

IDW is to offer the comic with a cover by J. K. Woodward, and a special retailer incentive variant by George Caltsoudas.

According to StarTrek.com, the single-issue presents the first time Voyager visits the mirror universe in a comic book. It is also the first issue for a monthly Mirror Universe event by IDW Publishing that is also set to feature The Original Series and Deep Space Nine. 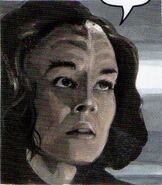