6011.7 & 6035.4
Mission's End, Issue 5 is the fifth and final issue of the Star Trek: The Original Series comic book miniseries Mission's End, published by IDW Publishing in 2009. It was written by Ty Templeton with art by Stephen Molnar. The issues brings to a conclusion the story of Archernar IV, the conflict between the Archernarians and the Crawlers, and the fate of the Heart of God. The events at Archernar also act as a catalyst in the life decisions of James T. Kirk, Spock and Leonard McCoy, with the three departing the Enterprise at the end of its five-year mission to take on the roles they appear in at the start of The Motion Picture movie, novelization & comic adaptation: .

The curtain comes down on the original five-year mission. Who will survive the Archernarian civil war? What finally drives Spock and McCoy out of Starfleet? And what happens when you take the most powerful weapon in the known universe... and actually set it off? Join Captain Kirk and the crew for the final mission of the USS Enterprise.

2270
The final phase of the five-year mission. 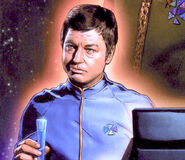 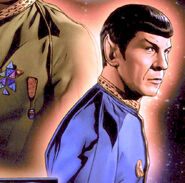 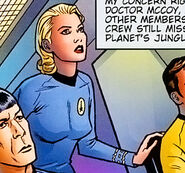 This story takes place at the end of the USS Enterprise's five-year mission in 2270. The issue begins immediately after previous events in Mission's End, Issue 4 and then jumps ahead a week to when the Enterprise is in spacedock, setting the scene for Star Trek: The Motion Picture.