Manheim device
In the mirror universe, the Mobius-class was a Terran temporal destroyer timeship in Imperial Starfleet service during the 29th century. (Star Trek Online official website: Season 6 Dev Blog #29) In 2409, the Tholian Assembly utilized multi-dimensional phasing technology to penetrate the borders of spatial dimensions and the space-time continuum itself, allowing for the retrieval of future starships. This enabled the Lobi Crystal Consortium to sell Mobius-class temporal destroyers to Federation Starfleet (STO website: Temporal Lock Box)

The Mobius-class of ships was in service in the 29th century. The vessels crewed 250 officers and was equipped with a Manheim device. Compared to its regular universe counterpart, the Wells-class temporal science vessel, the Mobius-class was more geared for combat rather than the protection of the timeline. Mobius-class ships in Federation Starfleet could carry the registry number prefix NCV and the ship name prefix ISS instead of NCC and USS.

The ships could be maintained at the Mobius Shipyards. (STO blog: Aftershocks) 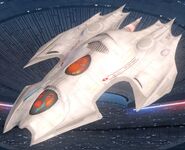