The Original Series No. 5

The Best of Star Trek, To Boldly Go

Captain's log, stardate 8163.5
The war is over! Freed of the influence of both the Organians and the Excalbians… The Federation and the Klingon Empire have entered negotiations to secure a permanent peace! Meanwhile, the Enterprise has entered the Beta Epsilon system, to determine the fate of the USS Valor, whose last transmission reported her in combat with a Klingon vessel! The Klingon desserter, Konom, has been temporarily assigned to the Enterprise, as Dr. McCoy attempts to determine why Konom hates the violence and carnage the rest of his race seems to relish.

Phillip Hodges, a former student of Admiral James T. Kirk, is the only survivor of a battle with a Klingon battlecruiser. Hodges has landed on a primitive planet and becomes a god. Kirk and his crew must minimize the impact without further violations of the Prime Directive.

Captain's log, supplemental
Lt. Sherwood sustained no permanent damage from the attack on her and the rebellion has been quelled, but two tasks remain… 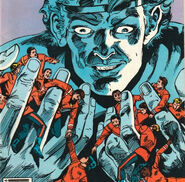