In this story, a society was threatened by a nova.

A planet was dying, but the civilization upon it was about to be reborn on a new world! All they required was a man of superior intellect whose brain could be expanded to encompass all their knowledge! And the advanced brain they chose belonged to … Mr. Spock!

The USS Enterprise dropped out of warp in a region less populated by star systems, but Spock locates a class M planet of interest, a world with an advanced civilization orbiting a star that will soon become a nova. James T. Kirk, Spock, Leonard McCoy and Montgomery Scott beam down hoping they might be able to assist the society's relocation efforts, but run into humanoids with spears seemingly from a tribal culture. The landing party is led up a rope bridge and locked up. However, Spock deduces that they are in an escape room and figures out how to open the cell. It opens, revealing a large, modern room.

They are introduced to the Grand Riza, the society's leader, who explains that solving the riddle qualifies Spock for a critical medical experiment to save their cultural heritage. He explains that, before they can abandon their world in colony ships, they need to back up their master computer, Wotam. They've grown helplessly dependent on it as their only source of knowledge. Their solution is to expand a humanoid brain to carry the computer's data. None of their people are biologically capable of the procedure, and it isn't guaranteed to be reversible, but Spock is willing to proceed.

Captain's log, supplemental.
The “operation” lasted some three hours. Mr. Spock was in no apparent pain or danger. But the rest of us could only gape in amazement and fear as the ray process ended!

The process expands Spock's skull and brain capacity, giving him a headache, and he recovers while the rest of the landing party tours the capital city. They return to find that Spock's self-identity has blurred with Wotam's. In his paranoia, he orders guards to secure them in a force field prison. The Grand Riza's second in command sneaks into the cell, offering a strategy for capturing Spock. When confronted, however, Spock confesses not to know who his attackers are. He raises a knife to kill Kirk, but halts when Kirk gives him a direct order as his commanding officer to stop, his Vulcan dedication overriding Wotam's conditioning.

Using some technology and a mind meld, Spock is able to safely embed Wotam's data split among three members of the population in a fully reversible procedure, and Spock returns to normal. Several days later, their ships launch to colonize another planet. Kirk hopes they've learned their lesson not to depend so fully on a computer. 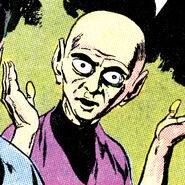 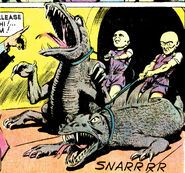 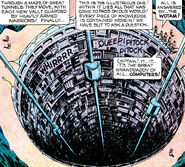 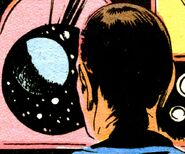