Murder on the Enterprise

Murder on the Enterprise

5716.4
"Murder on the Enterprise" was a comic book story published by Gold Key Comics in 1977. It was the 48th issue of their TOS series of comics, the 9th of 22 stories drawn by Alden McWilliams and the 16th of 20 stories written by Arnold Drake.

In this story, Kirk, Spock and McCoy were faced with a murder mystery aboard the USS Enterprise.

An unexplored world! A vast realm of new life forms waiting to enthrall a scientific mind! But for the illustrious Prof. Moore, the welcome has a deadly edge to it!

Moore's technician William Terrens gives Kirk and Spock a tour of the M-317 geological experimental station, including an unofficial arboretum containing some local Tojufu trees with a provocative scent that he thinks might have commercial applications. Terrens takes Kirk and Spock by aircar to Moore's Fire Falls, a spectacular landmark where the professor is at work. Kirk reunites with Moore, who first met when Kirk served as a lieutenant on the USS Farragut. Moore says he's been categorizing the local life for more than a year, and thinks the paper he'll present at Beta Aurigae will surprise people.

Passengers Emilie Bowers and Stoy Aaraka both have had negative experiences with Moore, and both make rude comments about Moore at a reception. Later, Kirk reviews the inventory log of Moore's personal effects, wondering why the professor didn't bring along any of the tojufu trees. That night, Kirk is woken up by security, who have just found Moore dead in the corridor outside his quarters. Spock finds a piece of ripped paper in Moore's hand with the word tojufu legible in the title, but a search fails to turn up the rest of the page, or any other portion of Moore's conference presentation.

An autopsy shows that Moore ate some pudding that was laced with a poison. Before delivering the pudding to Moore, the steward assisted both Aaraka and Bowers, leaving both as potential suspects. Spock determines that the title of the presentation included "unprecedented discovery", implying that the murderer wanted to prevent the paper from being read at the conference.

Kirk lies to Aaraka, Bowers, and Terrens, claiming that Moore gave him a backup of the presentation. That evening a bomb goes off near Kirk's cabin, injuring Spock.

Captain's log: 5718.4.
USS Enterprise in orbit Beta Aurigae III, ship's investigation: fruitless, as the murderer goes undetermined. Our passengers resist computer analysis of their testimonies, and I have no choice but to turn the matter over the Federation authorities on Beta Aurigae!

Before they beam down, Kirk tells the three that he'll be reading Moore's paper at the conference. Recovering in sickbay, Spock explains that of 63 potential titles to the paper, the most compelling was: "Tojufu trees, discovery of an unprecedented communicating plant form". If true, the trees would be protected by the Prime Directive and couldn't be pulped for profit.

At the Interstellar Geophysical Conference, Kirk approaches the podium and suggests he's going to read the paper. Behind him, Terrens aims a phaser, but Spock subdues him with a Vulcan nerve pinch. Kirk asks the audience for a moment of silence in honor of Moore.

2256 or 2257
While serving as a Lieutenant aboard the USS Farragut, Kirk met Professor Patrick Moore.
2267
Moore studied the Horta on Janus VI.
2268
The Enterprise picked up Stoy Aaraka and Professor Emilie Bowers as passengers.
2268 (stardate 5717.2)
Moore was killed while en route from M-317 to the Interstellar Geophysical Conference on Beta Aurigae III aboard the Enterprise. 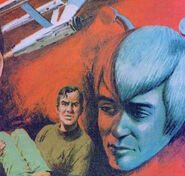 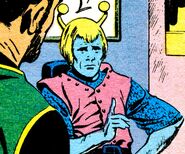 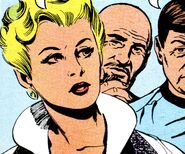 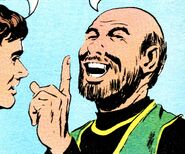 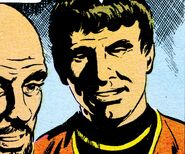 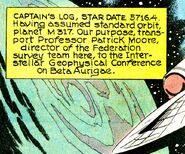 Kirk at the Interstellar Geophysical Conference.