A mushroom is the fruit of certain types of fungal lifeforms found on many planets, including Earth. Many have an umbrella-shaped cap and a stalk.

At least four sentient species are known to exist.

Some mushrooms contain psychoactive drugs, while others are used as an ingredient in food. The word was also used to describe objects of that shape, such as Spacedock or a mushroom cloud.

Mycology is the study of mushrooms. An expert is known as a mycologist. (TOS comic: "Aberration on Abaris")

Apparently Klingons will not eat mushrooms. In 2254, Hompaq would not try some, even on a pizza. (ST - The Captain's Table novel: Where Sea Meets Sky)

Bojnoggi, a very popular Tellarite drink, was a thick, tan-colored broth that tasted like caffeinated mushroom soup. Bersh glov Mog introduced Anthony Leone to it in 2265. Though he couldn't pronounce it, it became his favorite morning drink. (VAN novels: Summon the Thunder, Reap the Whirlwind)

In 2268, Enyart's restaurant at Starbase 12 served buffalo steak with onions and mushrooms. James T. Kirk, Spock and Leonard McCoy ate this meal once, with Spock avoiding the meat. (TOS novel: The Starship Trap)

In 2273, psychotropic mushrooms were ingested by archeologists Elsa Hoff and Paul Hoff on Abaris as part of their research into Abaris native culture, but it made them irrational and paranoid. Hikaru Sulu identified six mushroom species on the planet, including a variation of amanita muscaria with unique bioluminescence and enormous size. (TOS comic: "Aberration on Abaris")

In 2274, Spock toasted an armload of blue mushrooms over a campfire on Helva for Kirk, McCoy and Savaj. Kirk considered them unexpectedly delicious. (TOS novel: The Prometheus Design)

In 2281, Cleante al-Faisal recalled her first time eating Vulcan mushrooms. She'd eaten a pink and purple Vulcan variety with caps that were the size of dinner plates. T'Shael had harvested them carefully, leaving the stem undamaged so the cap could regrow. (TOS novel: Dwellers in the Crucible)

In 2293, Kirk learned that a tasty-looking field of toadstools at Starbase 499 was actually a gathering of a sentient, telepathic species. Though he'd always liked eating mushrooms, Kirk thought it might be a while before he next ate some. (TOS novel: The Fearful Summons)

In 2369, Starfleet Academy survival training included familiarity with fungi and mushrooms. Klingon student Tagar participated in a group exercise in the wilderness along with Harry Kim and was well-trained in selecting safe mushrooms to eat for their nutritional value. (VOY novel: Pathways)

Mushroom soup was a favorite of Chakotay. In 2371, Seska went to great lengths to make him a bowl of it. (VOY episode: "State of Flux")

Mushrooms were a delicacy for B'Elanna Torres and Harry Kim. In 2374, Tom Paris attempted to cultivate mushrooms for Torres aboard USS Voyager, with Kim allowing them to be grown in his quarters. Paris dreamed of grilling them, but circumstances derailed his plans. (VOY - String Theory novel: Cohesion) 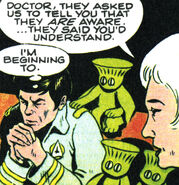