Mutiny on the Enterprise

Mutiny on the Enterprise

The Original Series No. 12

The ship is crippled in orbit around a dangerous, living, breathing planet, and a desperate peace mission to the Orion Arm is stalled.

Kirk has never needed his crew more. But a lithe, alien woman is casting a spell of pacifism - and now mutiny - over the crew.

Suddenly Captain Kirk's journey for peace has turned into a terrifying war - to retake command of his ship!

Even though the Enterprise is in desperate need of maintenance work, the ship is despatched to the Orion Arm. The Romulans have been making incursions in the area and the co-operation of the planets Ammdon and Jurnamoria is needed to patrol it. But the two planets are nearly at war with each other over food shortages so the Federation is sending an ambassadorial term.

En route, the Enterprise rescues a female alien, Lorelei, from a damaged spaceship. Committed to absolute pacifism and possessed of an almost hypnotic ability to persuade people of her viewpoint, Lorelei begins convincing several crewmembers that the Enterprise's mission will precipitate a war, since Ammdon has a defence pact with the Federation and both sides will assume they will assist them. Kirk organises a public debate between Lorelei and the ambassador, Zarv, which only leaves more people siding with Lorelei.

The Enterprise's engines blow out and a nearby planet is shown to contain the necessary minerals needed. Spock and McCoy lead a team to the surface but are unable to communicate with the inhabitants who take them prisoner. Zarv and his aides beam down to negotiate without Kirk's permission but are also imprisoned, with the transporter overloading in the process. Lorelei refuses to allow Kirk to use non-lethal force to rescue them and the entire crew sides with her. Kirk is marooned on the planet.

Lorelei negotiates with the planet, actually a single organism which the apparent inhabitants are a part of, and manages to obtain the minerals the Enterprise needs. Kirk rescues the landing party and together they hijack the shuttle taking the minerals to the Enterprise, although Zarv and his team are killed in the process. The crew are overcome and Lorelei is imprisoned.

The Enterprise continues to Ammdon where Kirk attempts to talk peace but Lorelei's prediction comes true and the two sides begin firing on each other and the Enterprise. In desperation, Kirk beams the opposing leaders aboard and imprisons them with Lorelei, who convinces them to order a ceasefire. Lorelei remains behind to help work out a peace agreement. 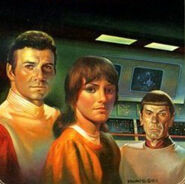