2376
"N-Vector, Chapter 1" was the first issue of WildStorm Comics' 2000 N-Vector miniseries of Star Trek: Deep Space Nine comics. The issue consisted of 22 pages edited by Jeff Mariotte, written by K.W. Jeter. The art was penciled by Toby Cypress and inked by Jason Martin and Mark Irwin.

Nog, who has been made the acting Chief of Security, is showing Major Kira Nerys an act of sabotage in the EPS Exhaust system, noting that he has found 56 similar systems failures around the station. Kira asks Nog for a report on the situation in the next 13 hours, and when walking by Quark's, notices something is awry and asks Nog to check it out.

Kira then returns to Ops and asks if they've heard anything from the USS Defiant, as the new commander of the ship was supposed to have arrived by now. The Defiant has not yet arrived, but a Romulan shuttle operating under a diplomatic pass is approaching and, under the command of Mos Senay. Kira isn't happy to hear his name and tells Nog to meet her in cargo bay 12.

Nog enters Quark's, and is told that Quark seems to have gone crazy, but in a good way. He just offered free drinks to all the customers and is dancing wildly around the room. He is also writing out no collateral interest-free loans to anyone who wants them. Nog becomes concerned and asks Quark what he's doing. Quark explains that he has decided the Ferengi Rules of Acquisition are outdated, and the only important thing is to build market share by making sure the customer knows he's your friend. Nog tells Quark he's scaring him, and while leaving to meet with Kira, tells Dr. Bashir to go take a look at Quark.

Kira and Nog intercept Senay on his way to Cargo Bay 12, where apparently Starfleet allowed him to set up a research laboratory a year before. Kira wants to through Mos Senay off the station, but due to Senay's diplomatic pass, he has been given permission to operate on Deep Space Nine. Since the Federation and Romulans are allied, there isn't much Kira can do about it.

Quark appears to suddenly come to, and upon seeing everyone with free drinks kicks them out of the bar. One customer hands him a PADD containing a record of all the no-interest no-collateral loans he made, causing him to pass out.

Nog presents his report to Kira, noting that all the instances of sabotage point to one person. Neither of them can believe it, and Kira tries to decide whether she should alert Starfleet Internal Affairs to the situation. Mos Senay enters the office as soon as Nog leaves to offer his help to Kira, saying he knows more about the sabotage than either she or Nog does, but Kira refuses to accept his help and sends him away, though Senay assures her that they will speak again.

Bashir and Ezri both analyze Quark, but are unable to find anything wrong with him. Quark worries about his reputation, thinking that other Ferengi will refuse to take him seriously since he gave things away. Meanwhile, back in his lab, Mos Senay makes a research entry noting that the "viroid" penetrated the target host more deeply than he anticipated and that the results will be interesting.

That night on the Promenade, two men are walking together bragging about how much money they got from Quark. When one of them breaks off, he is suddenly approached by a mysterious figure who assaults him, saying that he owes Quark money. Quark returns to his quarters to find a pile of latinum with a note attached declaring "This one is paid in full. More to come".

On Earth, Miles O'Brien is unpacking when he hears a ring coming from the door. He answers it and is greeted by Commander Tiris Jast. Jast explains she has taken the liberty of canceling all the classes O'Brien was supposed to teach and will contact his wife and family, since he must return to Deep Space Nine to answer charges of sabotage. Jast has O'Brien secured and orders the Defiant on a course to Deep Space 9. 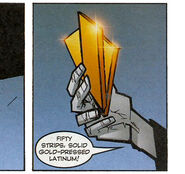 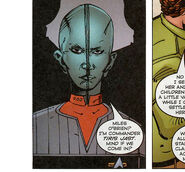 Quark, uncharacteristically generous due to the n-vector viroid.