Metaphasic shield
The Na'Far class, commonly referred to as Ferengi shuttles or Ferengi pods, were a small starship class used by the Ferengi. They were built by Ferenginar's leading seller of private craft, and also used by the Ferengi Alliance's military as shuttlepods. CCG set: Strange New Worlds; TNG episode: "The Price", et al.)

Grand Nagus Zek often used a Na'Far-class shuttle when he traveled to places such as Deep Space 9 and the Cardassia system. (DS9 episodes: "The Nagus", "Prophet Motive", "Profit and Lace")

In 2372, a vessel of this class, Quark's Treasure, was accidentally sent back in time to Earth and resulted in one of Humanity's early contacts with alien life in what was later know as the Roswell incident. This incident spurred a secret organization that defended Earth against alien threats into existence, and centuries later the organization still had copies of schematics of the shuttle from the incident in their possession. (DS9 episode: "Little Green Men"; TNG comic: "An Inconvenient Truth")

By the 25th century the Ferengi were known to sell these vessels to the militaries of other nations. (ST video game: Star Trek Online)

By 2409, three basic livery designs were available to choose from for owners, which could be modified further. The three options were were designated Type 1-4. They were differentiated by slight red shading. (ST video game: Star Trek Online) In addition, the installation of shields from specific factions modified the hull appearance, including shields from the Reman Resistance, the Breen Confederacy and the Dominion. (STO missions: "Coliseum", "Cold Storage", "Boldly They Rode") 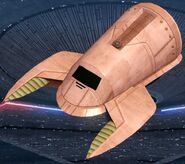 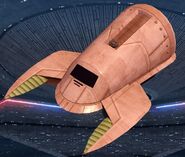 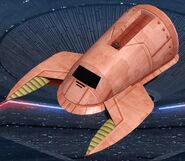 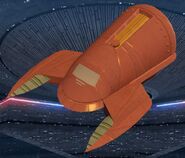 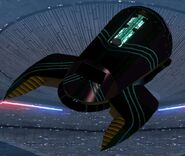