For other uses, see Nemesis.

"Nemesis" was the 71st episode of Star Trek: Voyager, the 4th episode of the show's fourth season, first aired on 24 September 1997. The episode was written by Kenneth Biller and directed by Alexander Singer.

Commander Chakotay's shuttlecraft is shot down while on a routine scout assignment, in what is found to be a Kradin-Vori star system. A group of the Vori, a civilization that lives on the Kradin-Vori planet, find him in the forest of their world. They are soldiers traveling on military patrol, and they take Chakotay with them and tell him of the situation. They are at war with the Kradin, the "Krady beast". Chakotay learns to speak the local idiom and finds out more of their culture.

The Vori outfit Chakotay and train him with their equipment so that he can travel safely with them. Their travel to meet another group of the Vori Defense Contingent becomes a battle, as they find the other group has been killed. Chakotay is the only survivor, escaping into a nearby village, the Larhana settlement.

Captain's log, stardate 51082.4.
After searching for more than two days we've finally located what's left of Commander Chakotay's shuttle. I can only hope the commander has fared better than his vessel.

Captain's log, stardate 51096.5.
Although Lieutenant Tuvok has managed to bring Commander Chakotay safely back to the ship, it may be some time before his psychological wounds are fully healed. 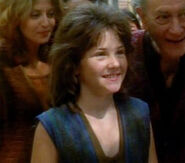