For other uses, see New Orleans.

Federation shuttlecraft
The New Orleans-class was a type of Starfleet frigate starship in service to the Federation in the 24th century. (TNG episode: "Conspiracy"; ST reference: The Star Trek Encyclopedia)

This class became active in the year 2332. (Decipher RPG module: The Price of Freedom)

This frigate class is named for New Orleans, an Earth city.

The class entered service in the early 24th century and remained in service until the 2370s, at least. (STA novel: Progenitor; DS9 episode: "Nor the Battle to the Strong")

The New Orleans vessels crewed 550 officers and crew, with room for up to 1,600 passengers. Additionally, the New Orleans could carry 4,200 persons in an evacuation situation. The vessels measured 340 meters in length. The New Orleans-class had four standard personnel transporters, four emergency transporter stages and four cargo transporters. These vessels were equipped with standard control computer, tractor beam, sensor and deflector shields.

The New Orleans used warp engines rated to cruise at warp factor 5 and max out at warp factor 9, with an upper maximum of warp 9.3 sustainable for 12 hours. The New Orleans impulse engines were rated for nominal .75c and maximum .9c travel. The New Orleans weapons had a 720 degree arc phaser emitter, with forward, aft, port and starboard firing arcs. The vessels had two photon torpedo launcher pods on top of the saucer with forward, aft, port and starboard firing arcs, firing spreads of 8 torpedoes from a magazine of 200. (Decipher RPG module: The Price of Freedom) Below the Engineering Section a third pod was placed. This was either a third torpedo pod or a mission specific equipment pod.

In the 25th century, the design of the New Orleans-class recon destroyer allowed its commanding officer to choose from different designs of livery, which could be modified further at starbases. These included the options Type 1-7, Upgrade and Veteran. (STO - Klingon War mission: "Welcome to Earth Spacedock") 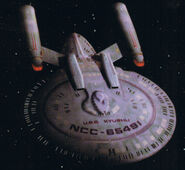 The Decipher RPG module: The Price of Freedom depicts a vessel with slightly different hull specifications than the New Orleans vessel that appeared in canon. It is possible the later canon design was a refit or variant of some kind.

Before The Star Trek Encyclopedia clarified the class of the USS Thomas Paine referred to in TNG episode: "Conspiracy", FASA had apparently intended to assign that ship as the Thomas Paine-class prototype vessel. This contradiction can be reconciled using dates that establish the newer New Orleans-class USS Thomas Paine had succeeded that other vessel and assumed its name.