New Romulus, also known by its Rihannsu name Mol'Rihan and formerly known as Dewa III or Vastam, is the third planet of the Dewa system and the capital of the Romulan Republic. (STO video game: Legacy of Romulus)

Formerly an Iconian colony, the planet Dewa III was home to a race that was brutally oppressed by their Iconian overseers some two hundred thousand years ago. When a rebellion began against the Iconians, Dewa was the first planet targeted. The rebels bombarded the planet from orbit, killing thousands and destroying the planet's geothermal taps which provided energy. The remaining Iconians escaped through one of their gateways, leaving the native Dewans to fend for themselves. Thousands of years later, the Dewans were preparing to make their way into space when they discovered an intact Iconian gateway abandoned in a subterranean cavern. The Dewans abandoned their space program and directed all their energies towards reactivating the gateway. However, the damage to the geothermal power taps caused by the rebel bombardment made the gateway unstable, and when it activated it caused massive tectonic and volcanic instability, plunging the planet into nuclear winter and resulting in the extinction of the Dewan race.

Arrival of the Vulcan exiles

After the Vulcan Reformation, the Sundering fleet - those Vulcan exiles who followed S'task - arrived on Dewa III, naming the world Vastam. Remaining for six months, the exiles faced innumerable challenges - the hostile wildlife, radiation from the Dewan extinction, the weather, the planet's geological instability, and basic survival needs such as food and water - while uncovering the buried relics of the Dewans. A mass meeting was held to discuss the future of the colony; after spending two decades onboard their ships, some exiles wished to remain on the planet rather than return to space, while many others agreed that the challenges were too great to consider remaining. The divisions resulted in bloodshed, with the deaths of 247 people in the fighting and the loss of the Sword of the Raptor Star, one of the blades of S'harien. The colony's leaders agreed that anyone who wished to stay could do so, but no one did.

The exiles thus returned to their ships and departed Vastam, continuing on until they settled on the planet they called ch'Rihan - Romulus. (STO video game: Legacy of Romulus [History of New Romulus lore accolades])

The search for New Romulus

The Romulan Star Empire would be shaken to the core by the Hobus supernova of 2387, destroying both Romulus and Remus. The Empire began to splinter, with the "old regime" of fear and deception set up by Empress Sela on Rator III. The survivors of Spock's unification movement, led by his pupil D'Tan, sought to establish a new, more open society for the Romulan people, one free of the isolationism and xenophobia that had dictated Romulan policy for centuries. To that end, a new government, christened the Romulan Republic, was established, with D'Tan as Proconsul. Establishing a fleet, the Republic sought to gather intelligence on the political climate of the United Federation of Planets and the Klingon Empire, the Romulans' traditional enemies, in order to work towards a possible peace. (STO mission: "Explore the Flotilla")

The Republic recruited survivors from the farming colony of Virinat, destroyed in an attack by the Tal Shiar and a group of aliens known as the Elachi, to help the search for a New Romulus. To that end, the survivors' antiquated Bird-of-Prey, which had been used to escape from Virinat, was brought into Republic service and sent on the scouting mission through the sector, battling against Nausicaan pirates ordered by Sela to hunt down Republic ships, until arriving on Dewa III/Vastam. The commander and crew cataloged the radiation levels, minerals, flora and fauna of the world and determined it would be a suitable colony site. The team also battled a Tholian search party that had located a metal object of some value, which was determined to be an ancient Vulcan blade of the Sundering era - rumored to possibly be the Sword of the Raptor Star itself, lost during the layover on the planet centuries earlier. With the planet declared suitable for colonization, D'Tan and his advisors determined that this would be their Mol'Rihan - their New Romulus. (STO mission: "The Search for New Romulus")

Because of New Romulus' proximity to Federation and Klingon space, D'Tan and his fleet commander, Temer, as well as the commander who rediscovered the planet, were called to Khitomer to attend a conference with the Klingon Empire and the Federation. Initial negotiations were interrupted by Sela, who condemned D'Tan and the Republic as rebels against her "rightful regime" over the Romulan people. Colonel Hakeev of the Tal Shiar, who had commanded the forces that destroyed Virinat and the Reman Crateris colony, transported explosives into the meeting hall, which the commander and first officer Tovan Khev managed to disarm without attracting attention from the Klingons (as a Romulan disarming explosives would be seen as suspicious), and battling against Hakeev's forces in orbit with the aid of Captain Ja'rod of the IKS Kang.

As Klingon High Council member Woldan was excoriating the Romulans for their long history of treachery, Hakeev beamed one last explosive into the conference hall - directly behind Woldan. Temer moved to disarm it, but in the end erected a forcefield around himself and the bomb, sacrificing himself to save the conference. This convinced the Klingons that the Republic's officers acted with honor, and both they and the Federation agreed to support the Republic in establishing New Romulus. (STO mission: "Turning Point")

New Romulus was later attacked by a large Elachi fleet attempting to carry off the inhabitants, but the attack was decisively defeated by the newly formed Romulan Republican Force, with reinforcements from Starfleet and the Klingon Defense Force. (STO mission: "Devil's Choice")

After the fall of Crateris, the death of Hakeev on Brea III and the disappearance of Sela in Brea's orbit, the Reman resistance forces under Guard Captain Obisek joined with the Republic. (STO mission: "New Romulus Aid")

Late in the year a team of Romulan scientists led by A'dranna detected a power signature deep beneath the Hwael Ruins. An away team investigated and discovered an Iconian gateway in a series of volcanic caves. They defeated the Tholians guarding the gate and claimed it for the Republic. (STO missions: "Latest Findings", "New Romulus: The Power Source", "Secrets of the Ancients")

A joint Romulan-Federation-Klingon team attempted to activate the gateway, but the attempt was covertly sabotaged by A'dranna, who had been brainwashed by the Iconians, causing the cavern to collapse and starting a wave of planet-wide tectonic activity, just as had destroyed the Dewans millennia before. The survivors of the team arrived in an Iconian installation in subspace and were forced to reset the entire Iconian gateway network to save New Romulus. This led to the discovery of the Jouret gateway and the Solanae Dyson sphere. (STO mission: "Sphere of Influence")

In 2410, New Romulus was invaded by the Iconians and their Herald forces. The Hwaei Ruins, specifically near the Underground Ruins were hardest hit, with the Iconian gateway below destroyed. (STO mission: "Blood of the Ancients")

Map of the settled area. 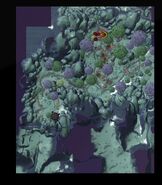 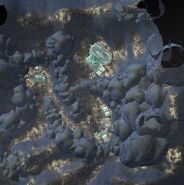 Mountain Pass, site of a Tal Shiar base. 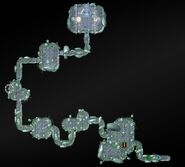 Paehhos Caves, site of a Tholian base.

Star Trek Online players have noted that the translation "Mol'Rihan" is actually grammatically incorrect according to the resources available for the Romulan language. "Mol", or "new", is supposed to be used as a suffix rather than a prefix, and "Rihan" is the adjective form of "Rihannsu" (the Romulan species in their own language), not a translation of Romulus. More accurate possible translations include "ch'Rihan'mol", roughly "of the Newly Declared" (the old "Declared" being the original Rihannsu, whose adopted homeworld was named ch'Rihan in their language).