No Compromise, Part 2 was the second issue in the three-part comic story arc No Compromise, published by DC Comics in 1994. The arc was written by Howard Weinstein and drawn by Carlos Garzon. In this story, Commander Chekov recalls a mission that took place in 2267 during Captain James T. Kirk's first five-year mission aboard the USS Enterprise. In that mission, the Enterprise copes with a colony suffering from radiation poisoning.

Captain's log, Stardate 3005.1: Our attempts to stop the mysterious alien ship bombarding the Harahni colony with radiation have been futile. Dr. McCoy says the colonists themselves are showing signs of developing radiation poisoning ... And the plants and animals have already started to succumb.

On Beta Mariotia III, the first adult teelak died from the colony's herd. Ensigns Pavel Chekov and Julia Crandall found three fields full of dead crops, though the soil remained viable. Animals like Harahni sheep had all been transplanted as part of the colony's plan to remake the planet in the image of their homeworld Harahn, rather than adapt using local resources. Adult colonist Tios died — frustrated rebel Keyah blamed colony manager Veneth.

Aboard the Enterprise, Chief Engineer Montgomery Scott and Lieutenant Nyota Uhura were working on the problem of the unidentified vessel in orbit. Scott figured out how to redirect the ship's deflector energy into a deflector field to protect a portion of the colony. Kirk tried to transport aboard the alien ship and was nearly lost before Scott recovered him. Observing gaps in the vessel's defensive field, Uhura searched for frequencies that would pass through the gaps, and suggested that Scott might try something similar with transporter frequencies.

As the deflector field was engaged, the 2,000 colonists gathered together within the protected area. Veneth feared that having everyone packed close together might make things worse.

Keyah and allies began attacking with energy pistols and rifles to take over the colony. Veneth was struck by an energy beam. Chekov ran to the colony manager while Crandall and Spock provided cover fire. Chekov beamed with Veneth back to the ship, but back on the planet, Spock had also been hit. Keyah took Spock and Crandall hostage. 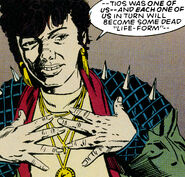 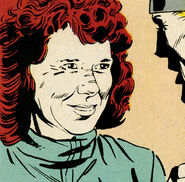 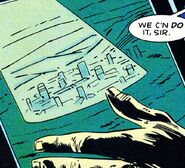 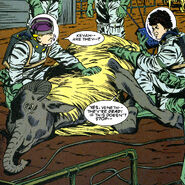 Retrieved from "https://memory-beta.fandom.com/wiki/No_Compromise,_Part_II?oldid=638406"
Community content is available under CC-BY-SA unless otherwise noted.