No Compromise, Part 3 was the finale of the three-part comic story arc No Compromise, published by DC Comics in 1994. The arc was written by Howard Weinstein and drawn by Carlos Garzon. In this story, Commander Chekov recalls a mission that took place in 2267 during Captain James T. Kirk's first five-year mission aboard the USS Enterprise. In that mission, Spock and Ensign Julia Crandall were taken hostage.

Recovered and back on the bridge, Kirk refused to negotiate with rebel leader Keyah. Chekov assumed that meant the hostages would be abandoned, but Kirk clarified that they had to follow Starfleet rules, assigning Chekov to use sensors to locate Spock and Crandall. Meanwhile, Christine Chapel and Leonard McCoy operated on injured colony manager Veneth. Scott continued his experiments to beam objects aboard the unknown vessel which had been barraging the Harahni colony on Beta Mariotia III with radiation for the past two months.

Radiation interference prevented Chekov from isolating Spock and Crandall from the other colonists. Kirk signaled an ultimatum to Keyah: he would leave in an hour if the hostages weren't released. Crandall said that Kirk would indeed sacrifice his officers if necessary, and colonist Borra whacked Keyah on the back of the head. Crandall suggested that instead of hurting each other, they should let the Enterprise aid them.

Captain's log, Stardate 3006.4: Commander Spock and Ensign Crandall have beamed up. Fortunately, Spock's wound wasn't serious… At his recommendation, Ensign Crandall will receive a commendation for her courage and composure while in captivity. I am preparing to beam aboard the alien vessel, to try to stop the radiation bombardment of the colony.

Captain's log, supplemental: Beaming over to what appears to be a cargo hold—hoping to avoid an immediate confrontation with whoever may be aboard this mysterious alien ship.

Captain's log, supplemental: Ensign Chekkov and I explore this vast ship… finding more questions than answers. Accommodations are tight, to say the least…

Captain's log, stardate 3007,1: We have found a chamber apparently used an an information and briefing center for would-be colonists belonging to the previously unknown species that built this ship—the T'Gai.

The 15,000-year-old vessel was a malfunctioning, automated T'Gai starship. The T'Gai had a similar colonial approach as the Harahni, to transplant animals and plants from the T'Gai homeworld, ignoring the value of indigenous species. With the radiation barrage cut off, the crisis was ended. Learning from their failure and that of the T'Gai, the Harahni agreed to use the planet's local resources to help solve their problems.

In 2290, Commander Chekov finished reminiscing about the mission, telling Captain Hikaru Sulu and Commander Nyota Uhura that, sadly, he and Crandall never got back together. She wanted to follow her dreams and didn't want to settle down. Crandall remained in the Beta Mariotia system to explore the T'Gai vessel, departing the Enterprise and joining three others in a science team aboard a class F shuttlecraft. 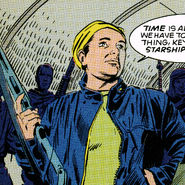 Borra
Add a photo to this gallery

Retrieved from "https://memory-beta.fandom.com/wiki/No_Compromise,_Part_III?oldid=638411"
Community content is available under CC-BY-SA unless otherwise noted.